Russia, U.S. To Square Off At U.N. Security Council Over Ukraine 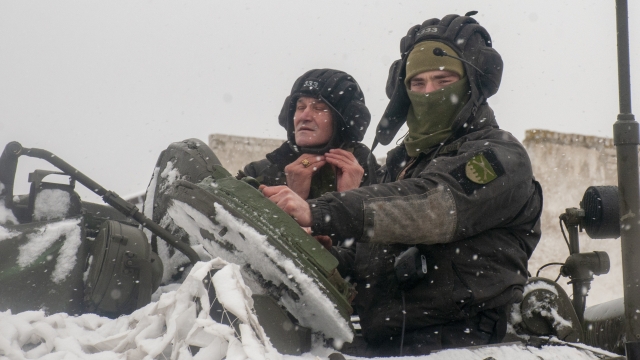 The United States and Russia are squaring off at the U.N. Security Council over Ukraine, with Washington calling Moscow's actions a threat to international peace and security, while a Kremlin envoy ridiculed Monday's meeting as a "PR stunt."

The session kicks off more high-level diplomacy this week, although talks between the U.S. and Russia have so far failed to ease tensions in the crisis. Russia has massed an estimated 100,000 troops near Ukraine's borders, stoking fears in the West of an invasion.

Russia denies it intends to launch an attack but demanded that NATO promise never to allow Ukraine to join the alliance, halt the deployment of NATO weapons near Russian borders, and roll back its forces from Eastern Europe. NATO and the U.S. call those demands impossible.

Russian Foreign Minister Sergey Lavrov and U.S. Secretary of State Antony Blinken didn't make any visible progress in easing the tensions at their meeting in Geneva earlier this month. They are expected to speak by phone Tuesday, according to the Russian Foreign Ministry.

U.S. President Joe Biden warned Ukrainian President Volodymyr Zelenskyy in a phone call Thursday that there is a "distinct possibility" Russia could begin an incursion in February, but the Ukrainian leader sought to play down the war fears, saying Western alarm over an imminent invasion has prompted many investors in the country's financial markets to cash out.

Zelenskyy said Friday that "we aren't seeing any escalation bigger than before," and charged that the Russian buildup could be an attempt by Moscow to exert "psychological pressure" and sow panic.

British Prime Minister Boris Johnson will visit Ukraine on Tuesday for talks with Zelenskyy, and will speak with Russian President Vladimir Putin later Monday, to urge him to "step back," Johnson's office said. Johnson says he is considering sending hundreds of British troops to NATO countries in the Baltic region as a show of strength.

Kremlin spokesman Dmitry Peskov said Monday that "hysteria promoted by Washington triggers hysteria in Ukraine, where people are almost starting to pack their bags for the front line."

While Russia could try to block the Security Council meeting if it gets the support of nine of the 15 members, the U.S. was confident it had "more than sufficient support" to hold it, according to a senior official in the Biden administration who spoke on condition of anonymity because he was not authorized to talk publicly.

Any formal action by the Security Council is extremely unlikely, given Russia's veto power and its ties with others on the council, including China.

Speaking Sunday on ABC's "This Week," Thomas-Greenfield said: "We're going into the room prepared to listen to them, but we're not going to be distracted by their propaganda."

She said last week that council members "must squarely examine the facts and consider what is at stake for Ukraine, for Russia, for Europe, and for the core obligations and principles of the international order should Russia further invade Ukraine."

Assuming the meeting goes ahead, the council will first hear a briefing by a senior U.N. official followed by statements from its 15 members including Russia, the United States and European members France, Ireland, United Kingdom and Albania. Under council rules, Ukraine will also speak.

"Both sides have shown willingness to continue their negotiations," he told several reporters on Friday. "Let them settle the differences through dialogue, through negotiations."

"Russia has said clearly they have no intention to have a war" and the Security Council should "help to deescalate the situation instead of adding fuel to the fire," Zhang said.

"We want to see de-escalation, diplomacy and dialogue," she added.

On Sunday, the chairman of the Senate Foreign Relations Committee, Sen. Bob Menendez, said that in the event of an attack, lawmakers want Russia to face "the mother of all sanctions." That includes actions against Russian banks that could severely undermine the Russian economy and increased lethal aid to Ukraine's military.

The sanctions under consideration would apparently be significantly stronger than those imposed after Russia annexed Crimea from Ukraine in 2014. Those penalties have been seen as ineffective.

Menendez also raised the prospect of imposing some punishments preemptively, before any invasion.