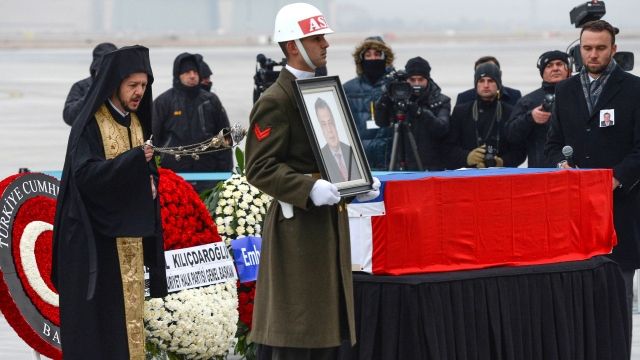 After the assassination of Russian ambassador Andrey Karlov in Turkey on Monday, the presidents of both countries vowed not to let the incident impede the process of normalizing relations between the two countries. And it appears they've kept their word.

Talks between Iran, Russia and Turkey regarding a path toward a Syrian peace deal went forward as planned Tuesday.

Those involved in the talks reportedly agreed to several steps to move forward, including a broader cease-fire.

Following Syrian peace talks Tuesday, both the Russian and Turkish foreign ministers attended a ceremony honoring Karlov before his body was returned to Russia.

Those developments came as a team of Russian investigators were allowed into the country to join the probe into Karlov's killing.

As of Tuesday afternoon, Turkish police had detained several people reportedly related to the 22-year-old gunman.

According to Al Jazeera, investigators are looking at whether the gunman had ties to the Gülen movement, which Turkey blames for attempting a coup over the summer. The leader of the group is Turkish cleric Fethullah Gülen, who is currently living in Pennsylvania.

Just a year ago, relations between Russia and Turkey grew cold when Turkey shot down a Russian military jet. Turkey said the jet was in its airspace, while Russia said the plane had been in Syrian airspace.

The November 2015 incident exacerbated already strained relations since the two nations supported opposing sides of the Syrian war. Russia has backed Syrian President Bashar al-Assad and his regime. Turkey has backed the opposition.

The Syrian regime and Russia have carried out bombings on Aleppo and have retaken most parts of the Syrian city.