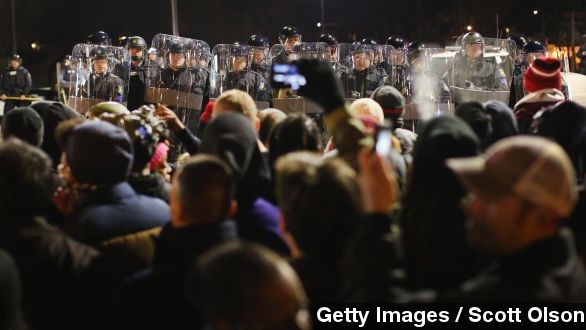 SMS
Russia Takes Jabs At U.S. Over Ferguson Protests
By Christian Bryant
By Christian Bryant
November 25, 2014
Russian media and government officials put their focus on Ferguson, saying the protests are payback for America's part in the Russia-Ukraine conflict.
SHOW TRANSCRIPT

Protests in Ferguson, Missouri this week presented Russia with the perfect opportunity to critique the U.S. and its local law enforcement.

"Police have used tear gas on a crowd of rioters who were throwing rocks."

Russian news outlets have been following the story out of Ferguson just as closely as U.S. outlets. (Video via RT)

Several writers carried a quote from a journalist at Russia 24 who described the protests like this: "Race relations, social inequality, a black ghetto — the fragile world that hardly held itself together through a belief in just a little bit of fairness, it seems, has finally collapsed."

The critiques extended from Russian news rooms to governmental offices. The Russian foreign ministry said in a statement Tuesday, "The latest events in Ferguson are another and very worrying signal to the American authorities indicating that it is finally time for them to focus on massive domestic problems in the field of ensuring human rights."

That seems to be the prevailing word from Moscow at least since the initial protests in Ferguson began: calling the U.S. is country that has descended into chaos and saying its leaders should spend more time worrying about problems stateside.

The ongoing Ukraine conflict has driven a wedge in already-icy relations between the U.S. and Russia. The U.S. and EU have imposed numerous economic sanctions on Russia for its part in the conflict.

A Washington Post article says Russia's focus on the Ferguson protests are an effort to claim American hypocrisy — the U.S. has condemned and punished Russia for Ukraine, but America has its own problems. The writer cites a pro-Kremlin news outlet calling Ferguson a kind of "divine payback."

Of course, Russia has its own social and political issues, which often lead to violence. Take for instance the anti-gay propaganda bans, which gay rights groups say promote hate crimes, with law enforcement allowing vigilante groups to kidnap and beat gays and lesbians. (Video via Channel 4)

And then in May of 2012, protestors and police violently clashed the day before Russian President Vladimir Putin was inaugurated for a third term. Hundreds of people were detained by police and dozens more were injured. (Video via Euronews)

Russia's practice of hitting back at criticism actually has a name — "whataboutism."

A 2008 article from The Economist calls it a Cold War-era tactic where any criticism of the Soviet Union was met with "What about ..." this or that.

It's hard to tell if this tactic is working — or what the end goal is — but The Wall Street Journal cites two polls that show a growing number of Russians view the U.S. in a negative light. And with news from Ferguson flooding Russian airwaves, it's hard to see those numbers shrinking.