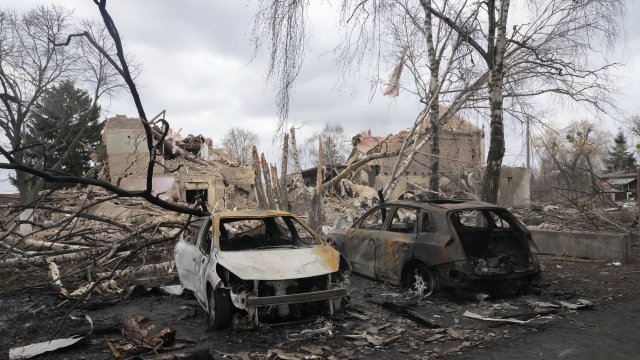 U.S. officials say Russia is trying to use the UN Security Council to spread and legitimize disinformation.

Even though Russia convened this meeting, they faced criticism for information from multiple countries, not just the U.S. But the country again made the allegation of "dangerous biological experiments in Ukraine supported by the U.S." on Friday.

The UN says it is not aware of biological weapon programs.

All week U.S. officials have strongly pushed back against Russia's claims, calling them flat out lies. It rejected that again Friday, pointing to Russia's own history. The concern is Russia is trying to create a pretext for some sort of false flag operation to justify any further aggression. Ukraine's ambassador to the UN, Sergiy Kyslytsya, shared that concern today as well.

"By calling this meeting, the aggressive state has shot itself in foot once again," Kyslytsya said. "Ukraine runs a health system that is totally in full compliance with these international obligations. And then in full cooperation with all relevant international organizations. The rest is bunch of insane delirium of Putin and his henchmen, including the Russian mission to the United Nations."

The U.S. Ambassador to the UN also reiterated that Ukraine does not have bioweapons programs or bioweapons labs supported by the U.S. Under international convention, the possession or use of biological weapons has been outlawed since the 1970s.

The Department of Defense does have a cooperative threat reduction program. They have worked in Ukraine to lessen the risk from former Soviet Union bioweapons that were left after the fall at the USSR.

Defense officials have said when Russia started their invasion, Ukraine's Ministry of Health did order a safe and secure disposal of samples to prevent any unintended exposure to any pathogens in the event that Russia would attack a laboratory.