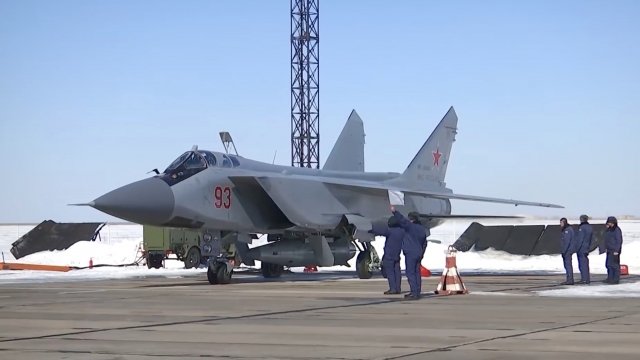 SMS
Russia Says It Successfully Tested Its Hypersonic Missile
By Katie Cammarata
By Katie Cammarata
March 11, 2018
The country's Ministry of Defense released what it says is video of the missile being deployed and hitting its target.
SHOW TRANSCRIPT

Russia says it successfully completed a test launch of the hypersonic missile President Vladimir Putin touted as an "ideal weapon" in early March.

The country's Ministry of Defense released what it says is a video showing the missile being dropped from a plane followed by a fiery tail. The ministry said the "launch was conducted normally" and the missile hit its target.

The BBC reports the Kinzhal missile system, which is named for a type of dagger, can travel 10 times the speed of sound and has a range of 1,200 miles.

As part of his announcement earlier this month, Putin showed an animation depicting warheads falling on what looks like Florida.