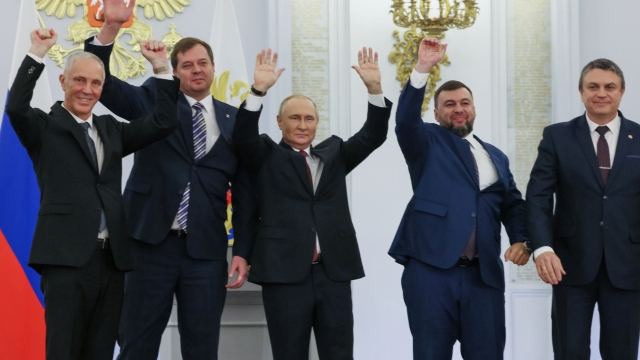 Moscow-installed administrations in four regions of southern and eastern Ukraine claimed Tuesday night that residents had voted to join Russia.

Putin vowed to protect newly annexed regions of Ukraine by “all available means," a nuclear-backed threat at a Kremlin signing ceremony where he also railed furiously at the West, accusing the United States and its allies of seeking Russia's destruction.

Zelenskyy then held a signing ceremony of his own in Kyiv, releasing video of him putting pen to papers that he said were a formal NATO membership request. He called the move “our decisive step."

Putin has repeatedly made clear that any prospect of Ukraine joining the world's largest military alliance is one of his red lines and it was among the justifications he has cited for his invasion — the biggest land war in Europe since World War II.

The U.S. announced sanctions for more than 1,000 people and firms connected to Russia's invasion, including its Central Bank governor.

Of Putin's annexation of the Donetsk, Luhansk, Kherson and Zaporizhzhia regions, President Joe Biden said: “Make no mistake: These actions have no legitimacy.” NATO and the European Union also rejected the annexation as illegal. The EU's 27 member states said they will never recognize the illegal referendums that Russia organized “as a pretext for this further violation of Ukraine’s independence, sovereignty and territorial integrity.” NATO Secretary-General Jens Stoltenberg called it "the largest attempted annexation of European territory by force since the Second World War.”

A Ukrainian fighter documented his unit's four-day drive to a seized city in Ukraine and described what he saw while he traveled.

Zelenskyy vowed to keep fighting, defying Putin's warnings that Ukraine shouldn't try to take back what it has lost.

“The entire territory of our country will be liberated from this enemy," the Ukrainian leader said. “Russia already knows this. It feels our power."

The immediate ramifications of the “accelerated” NATO application weren't immediately clear, since it requires the unanimous support of all members. The supply of Western weapons to Ukraine has, however, put it closer to the alliance's orbit.

“De facto, we have already proven compatibility with alliance standards," Zelenskyy said. “We trust each other, we help each other, and we protect each other. This is the alliance.”

Putin's Kremlin ceremony came three days after the completion in occupied regions of Moscow-orchestrated “referendums” on joining Russia that were dismissed by Kyiv and the West as a bare-faced land grab held at gunpoint and based on lies.

In his fiery speech at the ceremony, he insisted that Ukraine must treat the Kremlin-managed votes “with respect.”After the signing ceremony of treaties to join Russia, Moscow-installed leaders of the occupied regions gathered around Putin and they all linked hands, joining chants of “Russia! Russia!” with the audience.

Putin, however, cut an angry figure as he accused the United States and its allies of seeking to destroy Russia. He said the West acted “as a parasite” and used its financial and technological strength “to rob the entire world.”

He portrayed Russia as being on a historical mission to reclaim its post-Soviet great power status and counter Western domination that he said is collapsing.

“History has called us to a battlefield to fight for our people, for the grand historic Russia, for future generations,” he said.

The separatist Donetsk and Luhansk regions in eastern Ukraine have been backed by Moscow since declaring independence in 2014, weeks after the annexation of Ukraine’s Crimean Peninsula. The southern Kherson region and part of neighboring Zaporizhzhia were captured by Russia soon after Putin sent troops into Ukraine on Feb. 24.

Both houses of the Kremlin-controlled Russian parliament will meet next week to rubber-stamp the treaties for the regions to join Russia, sending them to Putin for his approval.

Putin and his lieutenants have bluntly warned Ukraine against pressing an offensive to reclaim the regions, saying Russia would view it as an act of aggression – threats that Moscow can back up with the world’s largest arsenal of nuclear warheads.

The illegal annexation was an attempt by Putin to avoid more defeats on the battlefields that could threaten his 22-year rule.

By formalizing Russia’s gains, at least on paper, Putin seemingly hopes to scare Ukraine and its Western backers with the prospect of an increasingly escalatory conflict unless they back down — which they show no signs of doing.

Russia controls most of the Luhansk and Kherson regions, about 60% of the Donetsk region and a large chunk of the Zaporizhzhia region where it took control of Europe’s largest nuclear power plant.

But the Kremlin is on the verge of another stinging battlefield loss, with reports of the imminent Ukrainian encirclement of the eastern city of Lyman. Retaking it could open the path for Ukraine to push deep into Luhansk, one of the regions Russia is absorbing.

Ukraine has vowed to retake all occupied territory and Russia has pledged to defend its gains, threatening nuclear-weapon use and mobilizing an additional 300,000 troops despite protests.