Russia Pressures Mariupol As It Focuses On Ukraine's East 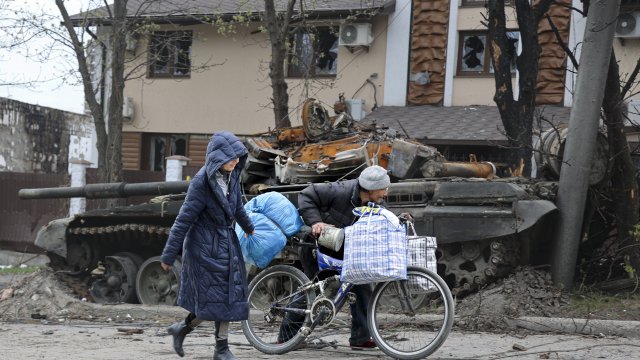 SMS
Russia Pressures Mariupol As It Focuses On Ukraine's East
By Associated Press
By Associated Press
April 20, 2022
Russia's goal is to capture the Donbas, the mostly Russian-speaking eastern region that is home to coal mines, metal plants and equipment factories.

Russian forces tightened the noose around diehard Ukrainian defenders holed up at a Mariupol steel plant Wednesday amid desperate new efforts to open an evacuation corridor for trapped civilians in the ruined city, a key battleground in Moscow's drive to seize the country's industrial east.

As the holdouts came under punishing new attacks, the Kremlin said it submitted a draft of its demands for ending the fighting, the number of people fleeing the country climbed past 5 million, and the West raced to supply Ukraine with heavier weapons for the potentially grinding new phase of the war.

Ukraine's military said Moscow continued to mount attacks across the east, probing for weak points in the Ukrainian defensive lines. Russia said it launched hundreds of missile and air attacks on Ukrainian targets, including concentrations of troops and vehicles.

The Kremlin's stated goal is to capture the Donbas, the mostly Russian-speaking eastern region that is home to coal mines, metal plants and heavy-equipment factories vital to Ukraine's economy. Detaching it would give Russian President Vladimir Putin a badly needed victory two months into the war.

Analysts say the offensive in the east could devolve into a grim war of attrition as Russia runs up against Ukraine's most experienced, battle-hardened troops, who have been fighting pro-Moscow separatists in the Donbas for the past eight years.

With that potentially pivotal offensive underway, Russia said it has presented Ukraine with a draft document outlining its demands as part of talks aimed at ending the conflict — days after Putin said the negotiations were at a "dead end."

Kremlin spokesman Dmitry Peskov said that "the ball is in (the Ukrainians') court, we're waiting for a response." He gave no details on the draft, and it was not clear when the document was sent or if it offered anything new to the Ukrainians, who presented their own demands last month.

A Ukrainian presidential adviser said Kyiv was reviewing the proposals.

Moscow has long demanded, among other things, that Ukraine drop any bid to join NATO. Ukraine has expressed a willingness to abandon the notion of NATO membership in return for security guarantees from a number of other countries.

In the all but flattened city of Mariupol, Ukrainian troops said Tuesday the Russian military dropped heavy bombs to flatten what was left of the sprawling Azvostal steel plant — believed to be the last holdout of troops defending Mariupol — and hit a makeshift hospital where hundreds were staying. The reports could not be independently confirmed.

Serhiy Taruta, the former governor of the Donetsk region and a Mariupol native, said 300 people, including wounded troops and civilians with children, were sheltered at the hospital.

Deputy Prime Minister Iryna Vereshchuk, meanwhile, said there was a preliminary agreement to open a humanitarian corridor for women, children and the elderly to leave Mariupol and head west to the Ukraine-controlled city of Zaporizhzhia on Wednesday afternoon.

Mariupol Mayor Vadym Boychenko urged residents to leave, though previous such agreements have fallen apart, with Russians shelling escape routes or otherwise preventing buses meant to pick up evacuees from entering the city.

"Do not be frightened and evacuate to Zaporizhzhia, where you can receive all the help you need — food, medicine, essentials — and the main thing is that you will be in safety," the mayor said in a statement.

A few thousand Ukrainian troops, by the Russians' estimate, remained holed up in the steel plant. The Russian side issued a new ultimatum to the defenders to surrender Wednesday, but the Ukrainians have ignored previous demands to leave the plant's labyrinth of tunnels and bunkers.

Mariupol holds strategic and symbolic value for both sides. The scale of suffering there has made it a worldwide focal point of the war. Mariupol's fall would deprive Ukraine of a vital port, complete a land bridge between Russia and the Crimean Peninsula, which Moscow seized from Ukraine in 2014, and free up Russian troops to move elsewhere in the Donbas.

Eyewitness accounts and reports from officials have given a broad picture of the extent of the Russian advance. But independent reporting in the parts of the Donbas held by Russian forces and separatists is severely limited, making it difficult to know what is happening in many places on the ground.

Western nations, meanwhile, are boosting their donations of military supplies to Kyiv for this new phase of the war, which is likely to involve trench warfare, long-range artillery attacks and tank battles across relatively open terrain.

U.S. President Joe Biden is expected to announce a new weapons package in the coming days that will include additional artillery and ammunition, and Canada and the Netherlands also said they would send more heavy weapons.