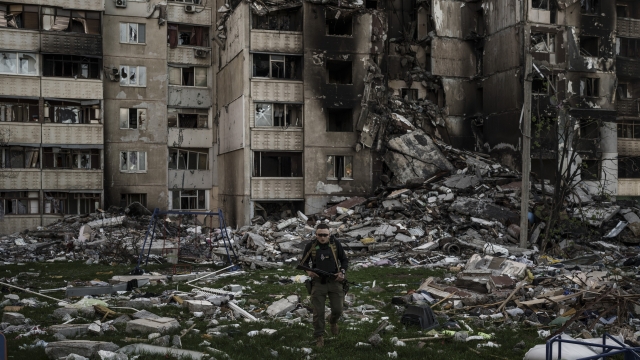 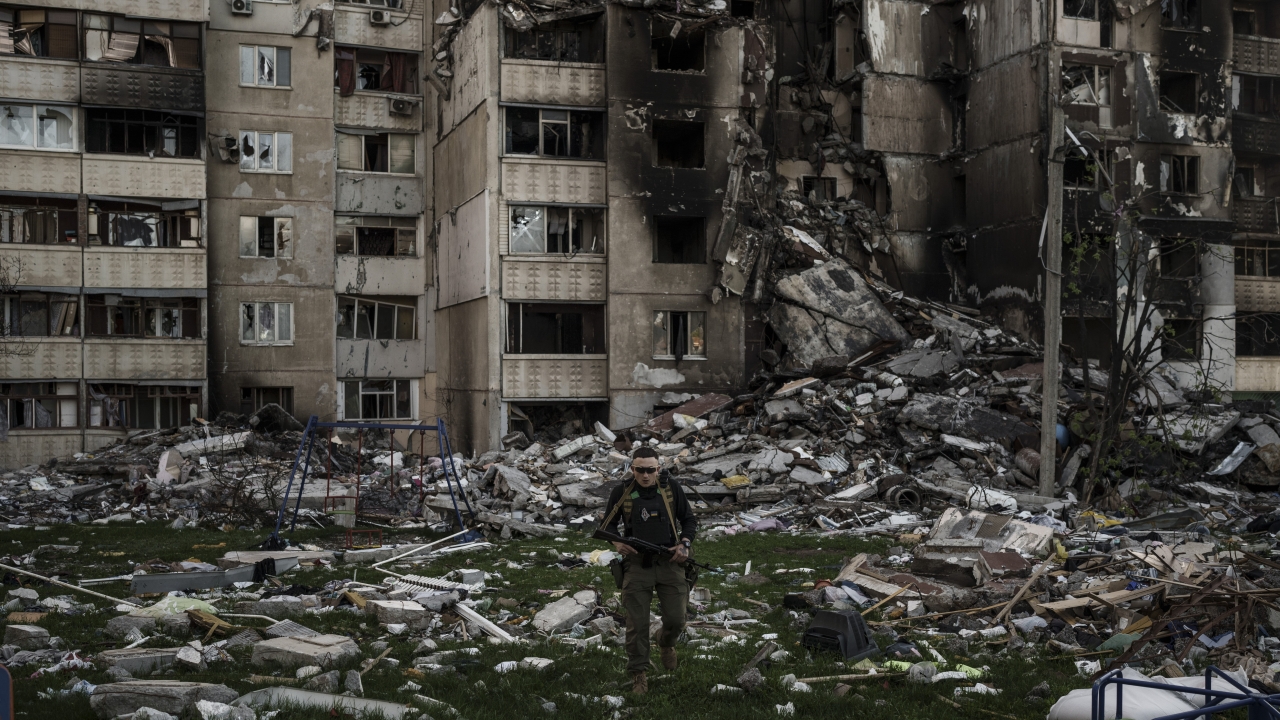 Russia pounded eastern Ukraine on Tuesday as the U.S. defense secretary promised to "keep moving heaven and earth" to get Kyiv the weapons it needs to repel the new offensive, even as Moscow warned such support risked widening the war.

U.S. Defense Secretary Lloyd Austin said that more help was on the way, as he convened a meeting of officials from around 40 countries at the United States' Ramstein Air Base in Germany to pledge more weapons. Germany announced it cleared the way for delivery of anti-aircraft guns to Ukraine.

"This gathering reflects the galvanized world," Austin said in his opening remarks. He added that he wanted officials to leave the meeting "with a common and transparent understanding of Ukraine's near-term security requirements because we're going to keep moving heaven and earth so that we can meet them."

After a fierce defense by Ukrainian forces thwarted Russia's attempt to take Ukraine's capital early in the war, Moscow now says its focus is the Donbas, the mostly Russian-speaking industrial region in eastern Ukraine that has been beset by separatist conflict since 2014.

The current war has spread devastation around Ukraine, leaving thousands of civilians dead and pushing millions to flee the country. It has raised food prices and energy costs worldwide and upended the post-Cold War security balance in Europe.

In the small city of Toretsk in the Donbas, residents are struggling to survive, collecting rainwater for cleaning and washing up and fervently hoping for an end to the fighting.

"It's bad. Very bad. Hopeless," said Andriy Cheromushkin. "You feel so helpless that you don't know what you should do or shouldn't do. Because if you want to do something, you need some money; and there is no money now."

In its latest assessment of the fighting, the British Defense Ministry described Russian advances and heavy fighting in the Donbas, with one town, Kreminna, reportedly falling after days of street-to-street fighting.

In Mariupol, the besieged city seen as crucial to the fight for the east, authorities said Tuesday that the Russian forces hit the Azovstal steel plant with 35 airstrikes over the past 24 hours. The plant is the last known redoubt of Ukrainian fighters in the city, and some of the civilians sheltering there were wounded in the strikes, officials said.

"Russia has drastically intensified strikes over the past 24 hours and is using heavy bunker bombs," Petro Andryushchenko, adviser to Mariupol's mayor, told The Associated Press by phone. "The number of those wounded will be clear once the rubble is cleared."

He also accused Russian forces of shelling a route it had offered as an escape corridor from the steel mill and its warren of tunnels and bunkers.

Beyond Mariupol, local officials said at least nine people were killed and several more wounded by Russian attacks on towns and cities in eastern and southern Ukraine. Pavlo Kyrylenko, governor of the Donetsk region, said on the Telegram messaging app that Russian forces "continue to deliberately fire at civilians and to destroy critical infrastructure."

Ukraine's General Staff also said Russian forces shelled Kharkiv, the country's second-largest city that lies outside the Donbas but has seen significant attacks as Moscow seeks full control of the region. Ukrainian forces struck back in the Kherson region in the south.

With the potentially pivotal battle for the east underway, the U.S. and its NATO allies are scrambling to get artillery and other heavy weaponry to that area in time to make a difference.

German Defense Minister Christine Lambrecht said her government decided on Monday to clear the delivery of Gepard self-propelled armored anti-aircraft guns to Ukraine, though she didn't give details. German Chancellor Olaf Scholz has faced mounting pressure, including from within his governing coalition, to approve sending heavy weapons such as tanks and other armored vehicles to Ukraine.

Austin, the American defense secretary, noted Tuesday that more than 30 allies and partners have joined the U.S. in sending security assistance to Ukraine and more than $5 billion worth of equipment has been committed.

But Lavrov noted the Western promises of weapons to Ukraine and said that "if this continues, then of course the negotiations will hardly have any kind of result, but I repeat once again that we are committed to a negotiated solution."

A day earlier, Lavrov warned weapons from Western countries "will be a legitimate target," and accused NATO of "pouring oil on the fire" with its support for Ukraine, according to a transcript of his televised remarks on the Foreign Ministry's website.

Lavrov also warned against provoking World War III and said the threat of a nuclear conflict "should not be underestimated."

Russian President Vladimir Putin has cited NATO's expansion and the risk that Kyiv could join the alliance as reasons for his invasion.

"A nuclear war cannot be won and it shouldn't be fought," Kirby told CNN during an interview from Germany, where he was traveling with Austin. "That kind of rhetoric is clearly not called for in the current scenario. What is called for is Mr. Putin ending this war."

Russia's invasion has worried several countries in eastern Europe that fear they could be next. Those concerns grew in Moldova after a Russian commander said that securing southern Ukraine would open the way to the Moldovan separatist region of Trans-Dniester. On Tuesday, police said explosions knocked down two powerful radio antennas at a facility close to the Ukrainian border, the second series of explosions reported in the region in as many days.

Washington has warned previously that Russian forces could launch "false-flag" operations to create a pretext for invading the territory of other nations. Russian officials have rejected such charges.

Elsewhere, International Atomic Energy Agency Director General Rafael Mariano Grossi visited the Chernobyl nuclear plant to deliver equipment, conduct radiological assessments and restore safeguards monitoring systems after tanks and troops churned up highly contaminated soil there in the early hours of Russia's invasion in February. His visit comes on the anniversary of the disaster at the plant in 1986, the world's worst nuclear accident.

In the largest ground conflict since World War II, Britain said it believes 15,000 Russian troops have been killed in Ukraine since Russia's invasion began — far above the 1,351 deaths acknowledged by Moscow. Defense Secretary Ben Wallace said 25% of the Russian combat units sent to Ukraine "have been rendered not combat effective."

Ukrainian officials have said about 2,500 to 3,000 Ukrainian troops had been killed as of mid-April.

As he opened the meeting in Germany, Austin sought to reassure Kyiv: "We know, and you should know, that all of us have your back and that's why we're here today — to strengthen the arsenal of Ukrainian democracy."