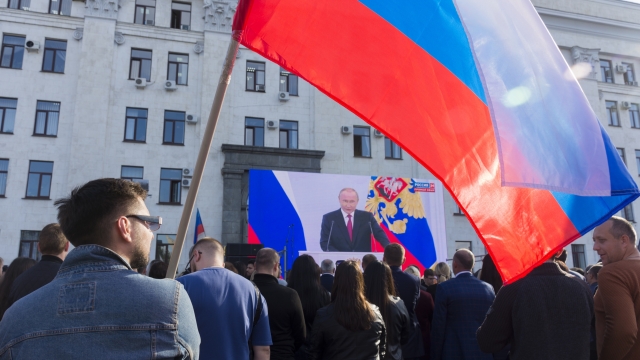 Six decades have passed since the former Soviet Union threatened nuclear war, and now the country is at it again.

Six decades have passed since the former Soviet Union threatened nuclear war, and now the country is at it again.

"We will, without question, use all means at our disposal to protect Russia and our people. This is not a bluff," Russian President Vladimir Putin said.

This time, the target is Ukraine. But in 1962, it was in the United States. U.S. surveillance discovered Soviet arms being built up in Cuba. Cuban leader Fidel Castro was worried the United States would once again try to overthrow him — and Russia offered to have missiles stored on Cuban soil as an insurance policy of sorts. President John F. Kennedy issued a warning to the Soviets — one they ignored. About a week later, he ordered a "naval quarantine" of Cuba, essentially blocking Soviet ships from getting through.

"This led to some very tense standoffs in the waters surrounding Cuba, and both the U.S. and Soviet Union putting their nuclear forces on high alert," said John Erath, Arms Control Center senior policy director.

Russian Leader Nikita Khrushchev called it an act of aggression. The countries engaged in both direct and indirect negotiations.

The Kremlin has struggled to replenish its troops in Ukraine. There even have been reports of widespread recruitment in prisons.

"In the end, the crisis was resolved through dialogue and diplomacy; cooler heads prevailed," Erath said. "We very fortunately did not have anyone making the critical mistake that would have led to a nuclear exchange. And it's generally regarded as the closest the world has come to nuclear war."

But Erath says there is a crucial difference between then and now — one that makes today much more dangerous for Ukraine.

"Khrushchev, in 1962, was relatively secure in his power. And the Communist Party was unchallenged as the ruler of Russia," Erath continued. "If we get to a situation here in 2022 where there is a real possibility of a government change in Moscow, then that could lead to the kind of mistakes that would put us on the road to a nuclear exchange."

Erath says Ukraine and Russia are likely engaging in similar backchannels we saw in 1962, but there are others involved — at least to a degree. President Biden said last week the world is at risk of a nuclear "Armageddon," though U.S. officials say they've seen no imminent plans for a strike.

"(Putin) in fact cannot continue with impunity to talk about the use of a tactical nuclear weapon — as if that's a rational thing to do," President Biden said. "The mistakes get made and the miscalculation could occur. No one can be sure what would happen and it could end in 'Armageddon.'"

Erath says the U.S. needs to be very careful not to directly threaten Russia with nuclear weapons, while also making it clear that any use would lead to consequences, because the risk is there.