Russia Gets Next World Cup, And Putin's Doing It Big 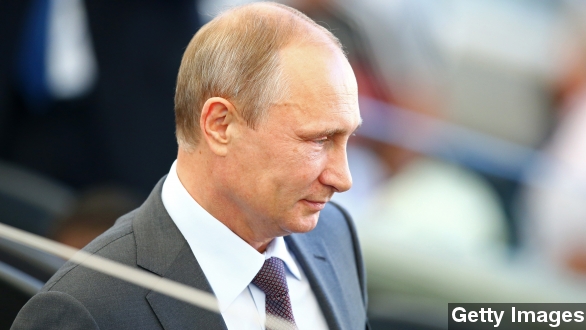 SMS
Russia Gets Next World Cup, And Putin's Doing It Big

By Sebastian Martinez
July 14, 2014
So Germany won the World Cup. Now what? Well, Russia — you know, the country tangled in conflict with its neighbor, Ukraine — will host the next one.
SHOW TRANSCRIPT

The World Cup is done and dusted, the Germans have taken the trophy, and the Argentines are rioting. What happens next? (Via Getty Images)

Well, if you're a soccer fan, some of the pep goes out of your step, and life becomes a little less magical.

But if you're Vladimir Putin, it just means one more thing you have to worry about now. (Via Getty Images)

That's because Russia is hosting the next World Cup in 2018, and in classic Putin style, they're doing it big. (Via FIFA)

Just in case anyone's forgotten, Russia — under Putin's direction — spent $50 billion to put on the Sochi Games this past winter. (Via Getty Images)

Now, according to NBC, Putin is only planning on spending $20 billion on the Russian World Cup — which is still almost double Brazil's record-setting price tag.

That money will go to building a proposed eight new stadiums, as well as all the accompanying infrastructure. (Via ABC)

"Of the 12 stadiums to be used, four aren't yet under construction. They're in Kaliningrad, Volgograd, Nizhny Novgorod and Samara." (Via RT)

But wait, isn't Russia already heavily invested in the ongoing deadly military conflict with neighboring Ukraine? Yes, yes, it is.

"Russia with a stern warning for Ukraine, threatening irreversible consequences after a Russian man was killed in a cross-border shooting." (Via CNN)

"Fourteen Ukrainian soldiers, including a general, were killed when their helicopter was shot down." (Via Fox News)

"Heavy fighting in eastern Ukraine kills at least 23 government soldiers and border guards and wounds 93, marking one of the deadliest days for Kiev.​" (Via The Wall Street Journal)

Not just that, but the BBC reports Russia has also upped its overall military spending by 50 percent over the past five years.

We're obviously still a ways from 2018, but even if the conflict hasn't wound down by then, it wouldn't be the first time a World Cup has come on the heels of an armed military conflict.

The 1982 World Cup in Spain started just one day after the Falklands War between Argentina and England, who both participated in the tournament, drew to a close. (Via The Guardian)

Russia and Ukraine's soccer teams have actually only played each other twice, with one match ending in a draw and the other a win for the Ukrainians.