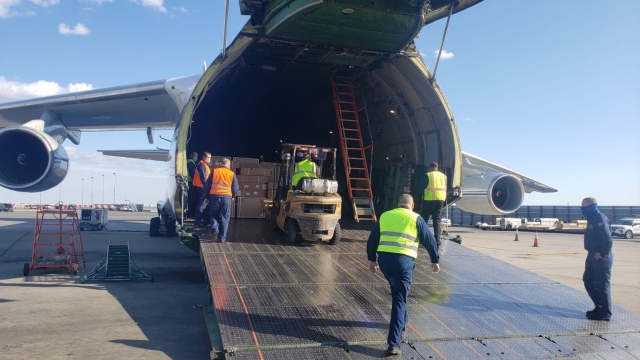 Russia sent an aid package to the U.S. to help fight the coronavirus. It arrived at New York's John F. Kennedy airport on Wednesday.

According to Russia's Ministry of Foreign Affairs, the gear was shipped in one of the country's largest cargo planes. A U.S. official said 60 tons of ventilators, masks, respirators and other items were delivered.

Putin's spokesman said Russia expects the U.S. to return the favor. They reportedly said Putin offered assistance under the assumption that "when [U.S.] manufacturers of medical equipment gain momentum they will be able to reciprocate if need be."

A senior White House official told Politico the U.S. will put FDA-approved items from Russia to use immediately, and that the U.S. "is sending equipment and supplies to many other countries and will continue to do more as we are able."

In February, Secretary of State Mike Pompeo announced the U.S. was sending aid packages with protective gear to countries fighting the coronavirus, including China.