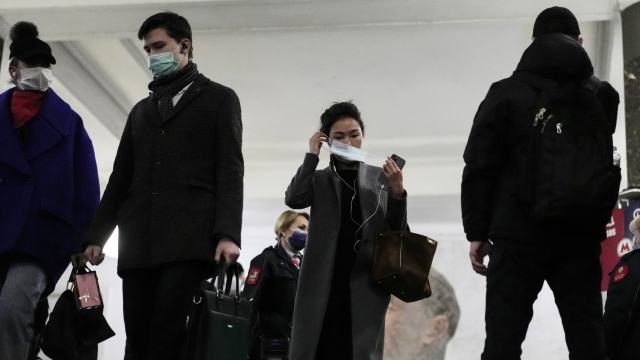 SMS
Russia Closing All Non-Essential Business For A Week Amid COVID Spike
By Newsy Staff
By Newsy Staff
October 25, 2021
For months now, Russians have lived mostly restriction free. Now the fourth wave has arrived, and it's the most severe yet.
SHOW TRANSCRIPT

Russia will close all non-essential workplaces for a week amid a significant spike in COVID-19 cases.

That's the worst figure since the start of the pandemic and a near-record of 1,069 in Moscow.

Correspondent Julia Chapman says the new restrictions aim to get the spread under control.

For months now, Russians have lived mostly restriction free, a patchwork of anti-COVID measures have been in place across different regions. But now the fourth wave has arrived and it's the most severe yet.

"The number of people getting ill is seriously rising as is the law, the medical institutions in recent weeks," Russian Prime Minister Mikhail Mishuston said. "We need to dedicate strength to preventing the situation from reaching a critical point."

The country has no shortage of vaccines against COVID-19, several different Russian developed shots are available, but only 34% of the country is inoculated and about half of Russians say they don't plan to be. Pollsters link distrust in vaccines to distrust in the government.

"President Vladimir Putin gave an order to reach collective immunity by this autumn," Russia's Deputy Prime Minister Tatiana Golikova said. "The order was to reach immunity of 80% of the adult population, including those who have recovered from COVID-19. But today, unfortunately, we've only slightly exceeded 45%. That level doesn't substantially impact mortality."

So authorities are stepping up restrictions. The whole country will have a paid week off work and many regional leaders have decided to go even further. Moscow's mayor says the city is moving towards the worst-case scenario. The capital will have some of Russia's tightest restrictions with schools, shops, restaurants and salons closed. In other parts of the country, many venues will be limited to those who have been vaccinated.

But nothing will stop people from mixing between households. And seaside resorts have reported an uptick in bookings.

Critics say the government has failed to convey the urgency of the pandemic for many Russians, financial struggles are more frightening than COVID-19. But with hospitals approaching capacity, authorities are sounding the alarm and the country is braced for its toughest measures since June 2020.