Russia Is Censoring Information, Media About Invasion Into Ukraine 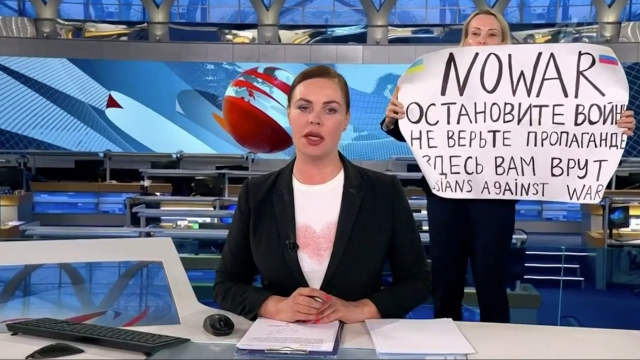 SMS
Russia Is Censoring Information, Media About Invasion Into Ukraine
By Ben Schamisso
By Ben Schamisso
March 16, 2022
Russian President Putin signed a law criminalizing any dissent or independent reporting about the war, with up to 15 years in prison for disobeying.

She held up a sign that said "No war ... Don't believe the propaganda. They're lying to you here."

The protester was swiftly detained and fined. But her act of defiance is going viral outside and inside Russia — despite the Kremlin's ramped-up censorship efforts.

"I am not completely surprised, given the fact that every second family in Russia has some relatives in Ukraine — including my family. And this woman, she also has her family in Ukraine," said Russian investigative journalist Andrei Soldatov. He is currently in exile in London.

Earlier this month, Russian President Vladimir Putin signed a law criminalizing any dissent or independent reporting about the war, with up to 15 years in prison for those who disobey.

"The level of both censorship and propaganda that we're currently seeing in Russia is unprecedented," said Coda Story Co-Founder Natalia Antelava.

It's now a crime in Russia to call the war a "war." The Kremlin and state media call it a "special military operation."

"To see so many people believe that Ukraine is a country run by Nazis ... It's terrifying," Soldatov said.

Soldatov says most Russians believe what they see and hear on state TV, including the claim that Russian troops have only been deployed in two breakaway regions in eastern Ukraine as peacekeepers.

"When somebody tells them 'Look, you have Kyiv besieged. You have all these airstrikes,' they act very surprised," Soldatov continued.

Since Russia's invasion of Ukraine and the ensuing protests at home, the Kremlin has moved to block a growing number of websites. On the list: Twitter, Facebook, Instagram, BBC News, Voice of America and nearly all independent Russian news outlets.

"All the independent Russian journalists have mostly left the country or have been forced to shut down," Antelava said.

Still, as highlighted by the protest on live TV, the Kremlin's grip on information is not absolute.

"There is a way to get around the Kremlin's line if you are making an effort to do so," Antelava continued.

So far, Russia has had limited success in shutting them down — and they've been gaining in popularity since the beginning of the war.

Researchers at Top10VPN.com have found that demand for VPNs in Russia has increased by nearly 2,700% in recent days.

Voice of America says it's receiving 40% of its Russian traffic through users with a VPN.

"They will use VPNs to access blocked websites to see the real story of what's happening in Ukraine," said Top10VPN.com Head of Research Simon Migliano. "However, the reality is that's a minority of people."

Also, the crackdown could intensify — with Russia now considering labeling Facebook an extremist organization and reportedly stopping people on the street to check their smartphones.

"If you have this icon of Facebook on your smartphone, you can be accused of supporting an extremist organization," Soldatov said.

"I was born in the Soviet Union, and my early childhood memories are of my mother glued to shortwave radio, listening to the BBC and listening to Radio Liberty because she was desperate to get the real news," Antelava said. "Even if it's very few who listen and who get a hold of that information, that information is invaluable for people now."