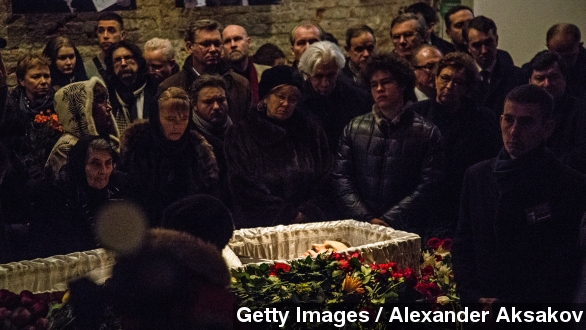 The funeral for Russian opposition leader was held Tuesday in Moscow, but authorities kept some would-be mourners from attending.

A very visible police presence monitored the lines of people who came to pay their respects at Nemtsov's coffin in the Sakharov Center. (Video via ODN)

But due to Russian sanctions, a handful of foreign politicians weren't allowed to attend the funeral, held later in the day. (Video via BBC)

Speaker of the Polish senate Bogdan Borusewicz was barred from entering the country because he's part of a list of banned politicians the BBC reports was drawn up in retaliation to EU imposed sanctions. (Video via Polskie Radio)

Authorities refused to allow Nemtsov's fellow opposition leader Alexei Navalny to attend the funeral, because he is serving a 15-day jail sentence for passing out flyers. (Video via Euronews)

Navalny had met with Nemtsov the day he was arrested, and was publicizing the March 1 protest that was turned into a memorial after Nemtsov's death. (Video via Novaya Gazeta)

Navalny appealed to be released for the funeral, but his appeal won't be heard until Wednesday, after the funeral.

Also missing Tuesday's funeral, Nemtsov's Ukrainian girlfriend, who was allowed to leave the country and return to Ukraine after being questioned by police. (Video via Dozhd)

Critics have blamed the political environment the Russian government has fostered for Nemtsov's killing. As the University of Virginia's Allen Lynch told Deutsche Welle, "The highly charged atmosphere of Russian politics, identifying traitors, fifth columnists - and Nemtsov was clearly understood to be in that column."

So far, Russian President Vladimir Putin has called the murder a "provocation" and Russia's investigative committee has said one possible motive is Nemtsov was a sacrifice for Russian opponents to incite anger against the Kremlin. (Video via President of Russia, Investigative Committee of the Russian Federation)

As a writer for The Guardian, "The only explanation not being given in Moscow for Nemtsov’s killing late on Friday evening is the blindingly obvious one: that he was murdered for his opposition activities."