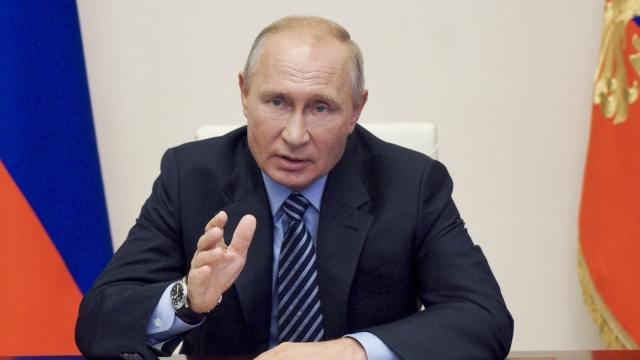 Health and security experts are questioning the validity of the world’s first registered COVID-19 vaccine — after Russian President Vladimir Putin announced Tuesday that his country has approved use of the treatment.

"This is, in essence, the Russians cutting corners, disregarding the normal standard scientific protocols for determining whether a vaccine is safe and effective, and pushing ahead," says J. Stephen Morrison, senior vice president and director of the global health policy center at the Center for Strategic and International Studies.

The vaccine is called Sputnik V, a nod to the Soviet Union's launch of the first satellite which sparked an international space race.

Critics are pointing out that in the rush, the drug hasn't gone into phase three human trials, after undergoing small-scale clinical trials with primarily Russian military members just weeks ago. An investor in the vaccine manufacturer, the Moscow-based Gamaleya National Research Institute of Epidemiology and Microbiology, tried to fan off safety concerns:

"Russian scientists really focused on safety, have done some vaccines approved with this mechanism before, and that allowed us to move so quickly with this one," said Kirill Dmitriev, CEO of Russian Direct Investment Fund.

The race for a vaccine has echoes of the Cold War.

"The Russians have a heritage of being able to look at biological agents and be able to work with them and develop from them. How much of that has lasted from the post-Cold War? We're not really sure," says Senior Vice President of Strategic Analysis at Stratfor, a Rane Company.

Putin's televised address comes after his popularity has plummeted — and the U.S., UK and Canada accused Russia of trying to steal international coronavirus vaccine research, which the Kremlin denies. As the pandemic continues, the concept of "vaccine nationalism" emerges.

"It starts with the whole idea that COVID is a worldwide problem right now. And I think the rush to a vaccine is a geopolitical win for whoever gets it," says top counterintelligence official William Evanina of the National Counterintelligence and Security Center.

"The Russians want to be the first to register their vaccine and beat out not only the United States, but, quite frankly, the Chinese who have been working very aggressively at vaccines as well," Baker says.

With skepticism posed by international news outlets before Putin's announcement, the vaccine maker launched a website to, quote, "fight the disinformation campaign." But scant research has been made publicly available, and the stakes are high for Putin and his people during the pandemic.

"He's been able to cow his own scientific community and his own public health community, and he's turning on the propaganda machine. But you have some very loud voices out there that are credible, which are saying this is just simply unacceptable," says Morrison.

"Unfortunately, we haven't data on clinical trials they conducted," says Svetlana Zavidova, executive director of the Moscow-based Association of Clinical Trials Organizations. "I think they were under pressure from the top, really."

The vaccine maker says the phase 3 trial will involve more than 2,000 people in Russia, the Middle East, and Brazil and Mexico — and starts Aug. 12. It expects mass production to begin in September, going to teachers and health workers on the frontlines in weeks.

"There's a very high probability that they will be given out coercively, i.e., teachers will be told, ‘You want to hang on to your job, take this vaccine.’ So this is not likely to be a voluntary process," says Morrison.