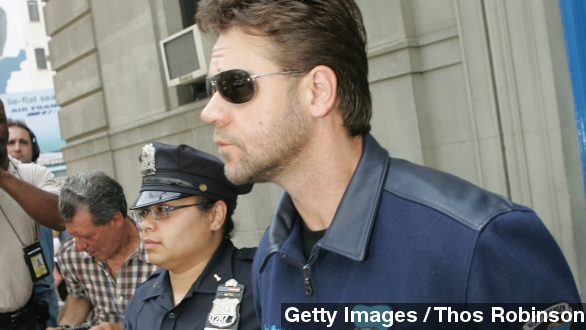 SMS
Russell Crowe Addresses Phone-Throwing Incident
By Christina Hartman
By Christina Hartman
November 24, 2014
More than nine years after pleading guilty to assault, Crowe says he “never laid a finger” on the hotel clerk at whom he allegedly hurled a phone.
SHOW TRANSCRIPT

It’s been nine years since this — actor Russell Crowe handcuffed and arraigned for allegedly throwing a phone at a hotel clerk in New York.

Crowe had been trying to call his wife in Australia and couldn’t get through. According to Crowe, Nestor Estrada wasn’t helpful when the actor called the front desk for assistance.

“His response was, ‘Whatever,’ and he hung up on me, so I went downstairs and had a word with him,” the actor said on the “Sunday Night” program.

And he’s now explaining his side of the story — though there are still some questions.

In an interview with Australia’s Channel 7, the Oscar winner is denying he ever hit Estrada, saying the clerk instead hurt himself running away from the actor.

No explanation as to why the clerk was running away or how he might have hurt himself doing so, though.

Police at the time said Estrada suffered a cut below his right eye from the thrown telephone.

Crowe’s publicist said he never meant to hit Estrada and that the phone hit a wall rather than the clerk’s face.

But Crowe actually pleaded guilty to the assault back in 2005. That plea ensured he would avoid prison time.

It was big news in the entertainment world — with many suggesting the incident was a reflection of Crowe’s notorious bad temper.

It’s no secret Crowe isn’t the biggest fan of the news media.

“Most of the people that work in your job are a pack of bloody idiots,” he once told a BBC journalist.

And to critics of his rumored hot temper, Crowe simply called himself “sensitive.”

Crowe used the interview to plug his new movie “The Water Diviner,” which explores the World War I Battle of Gallipoli.

His comments on that battle — which he called an invasion “of a sovereign nation” — is actually the bigger headline from the interview. Catch it in full on Channel 7’s website.