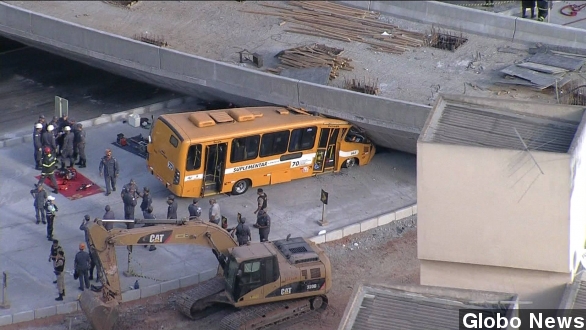 By Steven Sparkman
July 3, 2014
The overpass in Belo Horizonte was one of the government's infrastructure projects leading up to the World Cup but wasn't finished in time.
SHOW TRANSCRIPT

A tragedy in Belo Horizonte, one of Brazil's World Cup host cities, where an overpass collapsed, crushing several vehicles that were underneath it at the time.

The overpass fell Thursday afternoon, hitting a car, two trucks and the front of a bus. The collapse killed two people and injured 19 more, according to local media. (Via Terra)

One of the fatalities has been confirmed as the driver of the bus that was hit, and there might still be victims trapped under the rubble. (Via Globo News)

Belo Horizonte has already hosted five World Cup games with another scheduled for Tuesday. In fact, the World Cup is the reason the overpass exists in the first place.

It was one of Brazil's infrastructure projects leading up to the big event, but it wasn't finished in time. The road was still closed at the time of the accident, meaning there were no cars on top of it but traffic was still allowed to go underneath. (Via Arirang)

Belo Horizonte was one of the cities that saw violent protests leading up the start of the World Cup, with residents complaining the government was diverting money away from the people and spending it on stadiums. (Via BBC)

It's the second fatal accident to come out of the rushed construction projects. A beam that was meant to support a monorail in Sao Paulo fell last month, killing one worker. (Via Euronews)

Authorities haven't said what caused the collapse, but military, firefighter, police and construction crews are all working to rescue any survivors.