Running 5 Minutes A Day Might Add Years To Your Life 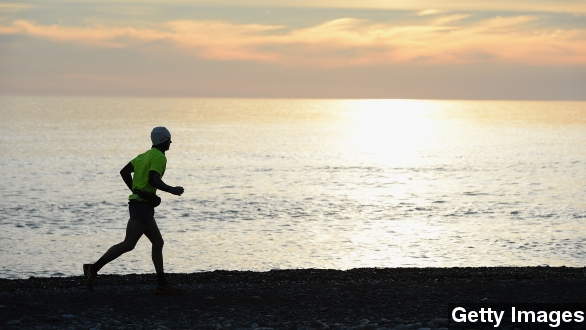 By Briana Koeneman
July 29, 2014
According to a new study, just five minutes of running or jogging a day could add years to your life.
SHOW TRANSCRIPT

Attention, everyone who hates to run: Turns out you only need to torture yourself for about five minutes a day to reap some important health benefits. (Via Getty Images)

According to a new study published Monday in the Journal of the American College of Cardiology, those who jogged or ran for as little as five minutes a day reduced their risk of premature death by about three years.

To get these results, researchers studied the exercise habits of more than 55,000 adults between the ages of 18 and 100 over the course of 15 years.

They found compared to those who didn't run at all, those who ran less than an hour a week were 30 percent less likely to die for any reason during the course of the study. (Via YouTube / Running Wild)

And on top of that, those runners were also 45 percent less likely to die of cardiovascular disease. (Via Getty Images)

A cardiologist and chief medical officer of Virginia Heart in northern Virginia told CNN: "That's important to note. Even with all the negative factors, such as obesity, smoking and diabetes, those who were, let's say, obese and ran had a less likely chance of dying from heart problems than those obese people who didn't run. Same with smokers, diabetics, etc."

Other studies have offered conflicting results — finding that taking your running routine to the max on a consistent basis may do more harm than good.

Research presented at the American College of Cardiology back in April found those who run an average of more 20 miles a week don't live as long as those who run less than 20 miles per week. In fact, they apparently live, on average, about as long as people who don't run much at all.

It seems consistency is key here. The study that said running could add years to your life found those who ran consistently over a six-year period gained the most health benefits — 29 percent saw a lower risk of death, and 50 percent had a lower risk of death from cardiovascular disease. (Via Getty Images)

The researchers advise those who want to start running should start off slow with walking, then move to jogging and running.