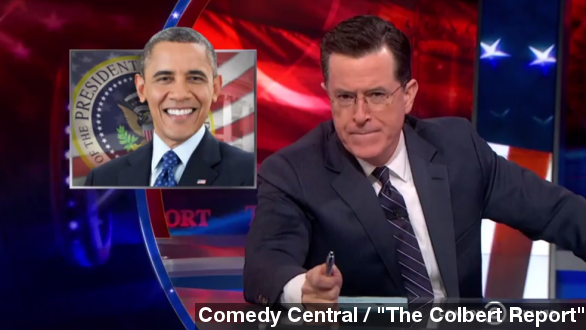 By Danny Matteson
April 4, 2014
According to a report from Mashable, Colbert wouldn’t just be listening if an offer came his way he’d likely be “into it.”
SHOW TRANSCRIPT

David Letterman announced Thursday he will soon retire as host of CBS' "Late Show" and the internet has been running rampant with speculation about who might replace him. According to a new report though, the network has its eye focused on one person in particular.

*Theme music, Colbert running over for interview* Yes, rumor has it the one and only Stephen Colbert is the network's top pick to replace Letterman. (Via Comedy Central / "The Colbert Report")

That according to a report from Mashable that says Colbert wouldn’t just be listening if an offer came his way he’d likely be quote “into it.”

Citing "people familiar with both sides of the discussions," Mashable says there’s been no formal contact between Colbert and CBS, and no agreement is in place, but added that Colbert "first engaged with network executives while Letterman was still mulling the timing of his retirement."

The report also says Colbert would drop his satirical ultra-conservative persona for the show and just be himself — something he’s rarely done in recent years.

In 2010 he even stayed in character while testifying to Congress about agricultural jobs in the U.S. That’s dedication. "I certainly hope that star power can bump this hearing all the way up to C-SPAN 1." (Via PBS)

Of course, Colbert’s name isn’t the only one that’s being bandied about.

"So, who’s getting Dave’s job and is Howard Stern interested?" (Via CBS / "The Insider")

And MTV's even got a list of 11 women who could take the hosting gig — including Tina Fey, Amy Poehler, Amy Schumer, and Mindy Kaling amongst others. Strangely, not a top 10 list.

Back to that Mashable report, it also notes Colbert's contract with Comedy Central is up at the end of 2014 so he could be a free agent in the near future.

Of course, this is all just speculation. Sixty-six-year-old Letterman hasn't set a date for when he's stepping down, and CBS currently isn't commenting on the possibility of Colbert replacing him. So, we'll just have to wait for an answer to the question:

SINGING: "Is this anythinnnnnnnnnng?" (Via CBS / "Late Show with David Letterman")