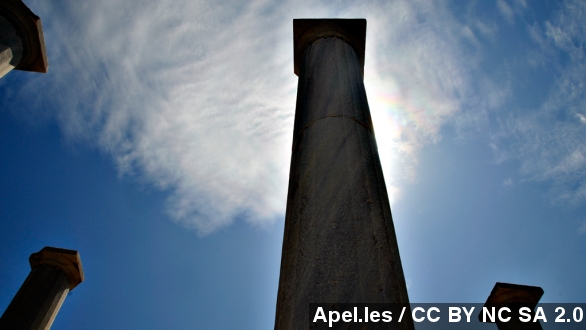 The ancient Roman city of Pompeii is a tragic story - destroyed in 79 AD by an eruption from Mount Vesuvius killing an estimated 16,000 people.

Now, scientists are saying they've found an "underwater Pompeii," although no one is sure what caused this city's demise.

The ruins are located off the coast of Delos, a Greek island. The settlement sank to the bottom of the Aegean Sea, and archaeologists have now found pottery remains and collapsed buildings in the water.

The pottery remains are where the Pompeii comparisons come in because researchers found similar workshops in the ancient ruins off the Italians coast. This Greek island itself has an interesting history.

In Greek mythology, the God of the sun, music and various other things (a Jack-of-all-trades God, it seems) Apollo, was born on Delos. He was the son of Zeus.

And according to the "Rough Guide to Greece," to add to Delos' quirkiness, no one was allowed to die or give birth on the island.

Given the island's history, it has long been an important historic site. Before the "underwater Pompeii" findings, the ruins were just thought to be a port. Archaeologists are planning further research.