Rubio's A No-Show At His Day Job, But He's Not The Only One 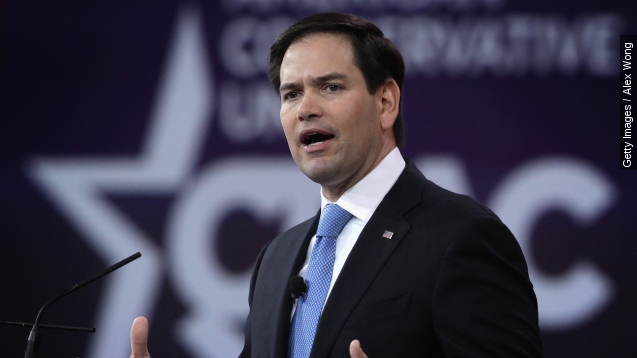 Sen. Marco Rubio defended his missed votes in the Senate by pointing out he's not the only one with a poor attendance record.

If you stop showing up for work, chances are you'll get fired — unless you're a U.S. senator running for president.

"When the Sun Sentinel says Rubio should resign, not rip us off. When they say Floridians sent you to Washington to do your job. When you act like you hate your job — do you?" CNBC moderator Carl Quintanilla asked.

According to GovTrack, a site that tracks congressional votes and legislation, Florida Sen. Marco Rubio has skipped out on more votes than any of the other sitting senators in the race.

He's missed 26 percent in the past year. Lindsey Graham and Ted Cruz were no-shows for 20 percent. And Bernie Sanders missed 11 percent.

Now, you could definitely make the argument that campaigning for the nation's highest office is a full-time job in itself. (Video via Marco Rubio for President)

But then there's Sen. Rand Paul, also a presidential hopeful but with near-perfect attendance in the upper chamber.

Although the difference there could be accountability to voters at home. Unlike Rubio, Paul has said he’ll run for re-election in the Senate if he loses his White House bid.

We should point out it's not like this is the first time presidential candidates have been accused of shirking their congressional duties.

During the same period in 2008, GovTrack found John McCain had skipped out on 51 percent of votes, and Barack Obama, 29 percent. Hillary Clinton was less of a no-show, missing just 13 percent.

None of the candidates really faces any repercussions for skipping votes, though. Congress has had a law since 1856 that docks a member's pay unless there's a good reason for their absence. Unsurprisingly, it's not enforced.