Royal Couple, King James And All The Commotion At Barclays 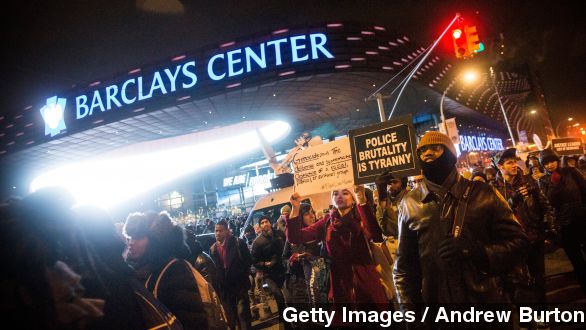 SMS
Royal Couple, King James And All The Commotion At Barclays
By Jay Strubberg
By Jay Strubberg
December 9, 2014
There was action both inside and outside Barclays Center Monday night with the Royal couple on hand to watch the Nets take on King James and the Cavs.
SHOW TRANSCRIPT

There was plenty of action both inside and outside Barclays Center Monday night with the Duke and Duchess of Cambridge on hand to watch the Brooklyn Nets take on the Cleveland Cavaliers.

Using #RoyalShutdown to gather support, protestors of the Eric Garner case gathered outside the arena. The demonstrators staged so-called die-ins, blocked traffic and spilled into a nearby mall.

Now, it's unclear why protestors used Prince William and Princess Kate's visit as a means to stage demonstrations outside Barclays Center. Though, it likely has a lot to do with how much attention the couple typically attracts.

But Royal family supporters need not worry about the couple's well being. Security was reportedly very tight, so it appears the two were able to enjoy the game in peace. (Video via WALA)

Meanwhile, inside Barclays Center, Lebron James and several other players took to the court Monday night donning 'I Can't Breathe,' shirts during warmups, an apparent show of solidarity with Eric Garner protestors.

A reporter says, "Is this more of a Cavs thing than just one or two players?"
Lebron James replies, "No, it's not a Cavs thing. It's a worldly thing. ... Obviously, as a society we have to do better. We have to be better for one another. No matter what race you are."

Social issues aside, James met with the Royal couple in the backstage area and gave them a couple gifts, including one pint-sized jersey for the latest addition to the family.

And appearing at Barclays Center was just one of many stops on the Duke and Duchess's U.S. tour.

Princess Kate visited a child development center in Harlem Monday while Prince William had a sit-down chat with President Obama in Washington D.C.

The couple is expected to visit the Sept. 11 Memorial and Museum Tuesday morning before their trip comes to an end.