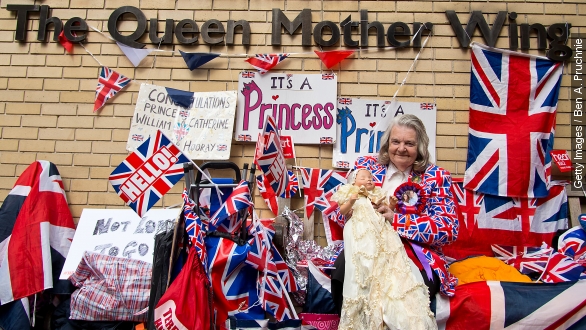 The Duchess of Cambridge "safely delivered" her daughter Saturday morning, according to Kensington Palace.

After weeks of waiting on the Duchess of Cambridge to give birth, the newest addition to the royal family is now here.

"We welcome with humble duty the new baby of their Royal Highnesses the Duke and Duchess of Cambridge," the unofficial town crier said Saturday.  (Video via The Telegraph)

Kate gave birth to her second child — a baby girl — at 8:34 am London time on Saturday morning at St. Mary’s Hospital in London. (Video via The British Monarchy)

We don’t have a name yet for the new princess but we know according to Kensington Palace, the baby weighs 8lbs, 3oz and both Kate and baby are “doing well.” (Video va ODN)

The baby now becomes the fourth in line to the throne after Prince Charles, her father William and older brother George. (Video via ABC)

This video includes images from Getty Images and music from Bensound / CC BY ND 3.0