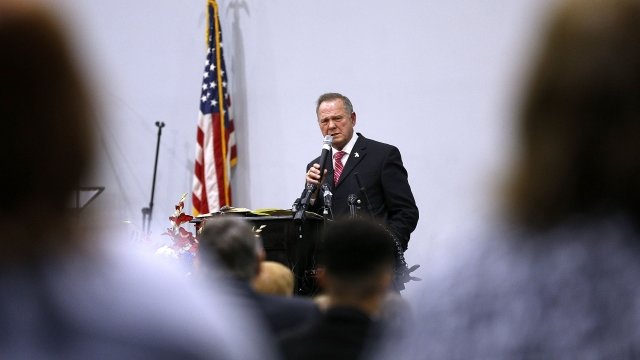 SMS
Roy Moore Says He's Being 'Harassed' By The Media
By Lindsey Pulse
By Lindsey Pulse
November 15, 2017
The U.S. Senate hopeful criticized the media's reports of sexual misconduct allegations against him and says he wants to focus on the "issues."
SHOW TRANSCRIPT

Roy Moore says he's being "harassed" by the media over a series of sexual misconduct allegations against him.

The Republican U.S. Senate hopeful made the comment at a Baptist church in Alabama on Tuesday night. He suggested the timing of the allegations against him are an effort to derail his political career.

It's been nearly a week since The Washington Post reported the first sexual misconduct allegations against Moore. In that story, four women claim he made sexual advances toward them when he was in his 30s and they were in their teens.

Another woman came forward with sexual misconduct allegations on Monday.

Following the Post report and Moore's initial response, a number of GOP leaders called for Moore to withdraw from the race, including House Speaker Paul Ryan and Senate Majority Leader Mitch McConnell.

Other Republicans, including Sen. Ted Cruz and Senate Majority Whip John Cornyn, have withdrawn their endorsements of Moore. 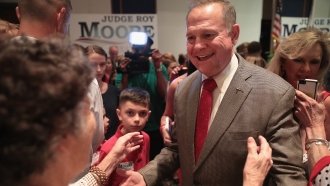 And the Republican National Committee appears to have pulled out from a joint fundraising agreement with Moore, according to filings with the Federal Election Commission.

At the church, Moore criticized the media's attention to the allegations, saying he wants to focus on the "issues" and "where this country's going."

Alabama's special election is set for Dec. 12. Moore is up against Democrat Doug Jones to fill the U.S. Senate seat vacated by Attorney General Jeff Sessions. As of Wednesday afternoon, there was no indication from Moore that he plans to step down.