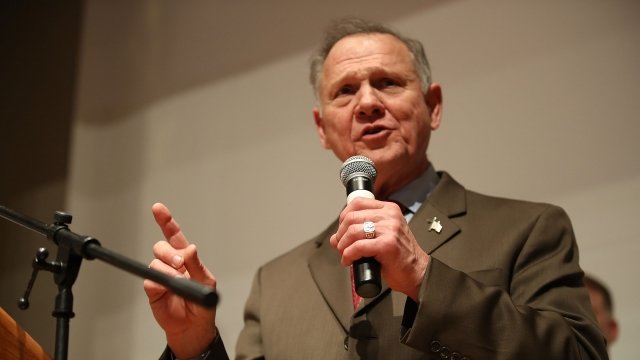 Moore and his wife filed a lawsuit claiming defamation and political conspiracy.

Moore's campaign against Democrat Doug Jones was plagued by sexual misconduct allegations. Jones ended up winning the special election to become one of Alabama's U.S. senators.

The lawsuit specifically names four women and one man as defendants. Three of the women made claims of sexual misconduct or unwanted advances from Moore; the fourth said she had a relationship with Moore when she was a teenager and he was in his 30s. The man reportedly helped facilitate the initial Washington Post report on the alleged misconduct.

The lawsuit also names "fictitious defendants 1-19," saying those people are "persons or entities whose names will be substituted upon learning their true identities."

One of the women named as a defendant, Leigh Corfman, has her own lawsuit against Moore. She filed a defamation suit against him in January.

Moore's suit claims the defendants "committed libel and slander against Judge Moore by making statements which were false, malicious, and made with intentional or reckless disregard of the truth."

It asks for an unspecified amount of compensatory and punitive damages.