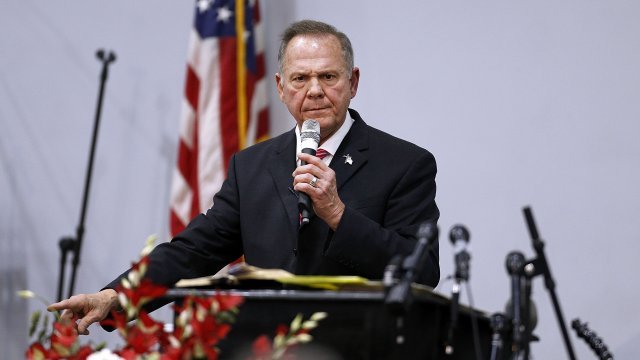 SMS
Roy Moore Accuser Reportedly Presents Evidence Of Relationship
By Gabrielle Ware
By Gabrielle Ware
December 4, 2017
The Washington Post reports she has a card that she says Moore gave her when she was a teenager.
SHOW TRANSCRIPT

Debbie Gibson said she dated Moore when she was 17 and he was 34. On Monday, she presented a high school "memories book" that contained a graduation card she said Moore gave her.

According to a Washington Post report, it read: "Happy graduation Debbie. I wanted to give you this card myself. I know that you'll be a success in anything you do. Roy."

Debbie says she dated Moore willingly and had written elsewhere in the book: "Roy S. Moore and I went out for the first time. We went out to eat at Catfish Cabin in Albertville. I had a great time."

At least eight women have accused him of sexual misconduct. Moore denies any wrongdoing.