Rowling Did Not Tease Another Potter Book On 'Today' Show 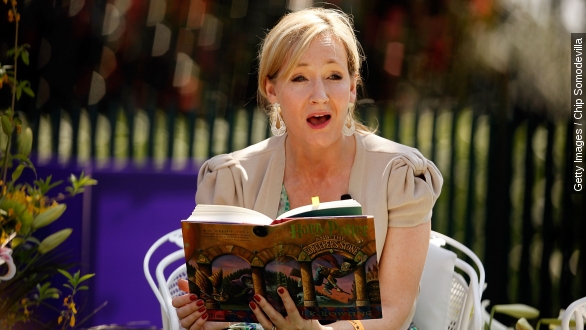 On NBC's "Today" show, J.K. Rowling refused to rule out the possibility of another "Harry Potter" book, fueling some pretty attention-grabbing headlines that she was "teasing" a new book — but even saying that is a bit of a stretch. This is what she said when NBC's Matt Lauer asked if she had started a sequel.

"No, I haven't. Even as I answer that, I know someone is cutting that on YouTube to make it seem like I gave you hope," Rowling said.

Rowling went on to say she had no plans to do another "Harry Potter" book, but she reserved the right to change her mind.

"I have always said I'm not going to say 'I definitely won't' because I don't see why I should say that," said Rowling.

"See, now I heard that answer and thought there is hope," said Lauer.

Sure, we can always hold out hope, but she didn't really give us a reason to hold our breath in anticipation of another book about Harry, Ron and Hermione.

She was really just on the "Today" show to promote her charity project, Lumos. It's aimed at improving the lives of the 8 million children who live in orphanages and child care institutions throughout the world.

All of this doesn't mean she isn't returning to the wizarding world, though. Rowling is writing the script for a spinoff movie, "Fantastic Beasts and Where to Find Them." That film is slated for a 2016 release. (Video via The Guardian)

The appetite for another "Harry Potter" book and its inevitable movie adaptation would certainly be huge. The franchise is still popular eight years after its conclusion.

The last book in the series sold 11 million copies on its first day alone and the final movie, "Harry Potter and The Deathly Hallows Part 2," grossed $1.3 billion at the global box office.