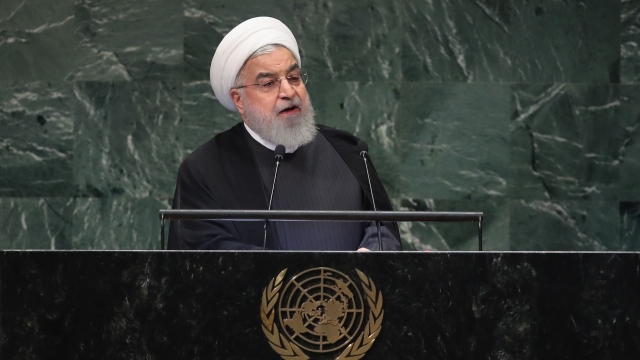 SMS
Iran's President Says Talks Are Possible If U.S. Rejoins Nuclear Deal
By Ahmed Jawadi
By Ahmed Jawadi
February 17, 2020
Rouhani said the U.S. can "sit at the negotiating table ... like before" once it lifts sanctions and resumes commitments under the 2015 nuclear deal.
SHOW TRANSCRIPT

Iranian President Hassan Rouhani said the country would be willing to meet with the U.S. if it recommits to the 2015 nuclear deal, saying it "will never negotiate under pressure" or "from a position of weakness."

During a news conference on Sunday, Rouhani said the U.S. can "sit at the negotiating table ... like before" once it lifts economic sanctions and resumes its commitments under the Joint Comprehensive Plan of Action. He also said Tehran "will never yield" to Washington's "maximum pressure" campaign, and that "securing peace and stability in the ... Middle East and in the Persian Gulf is impossible without Iran's help."

Iran has been gradually reducing its commitments under the nuclear deal ever since President Donald Trump pulled the U.S. out of the agreement in 2018. That move reinstituted economic sanctions on Iran, and reignited hostilities between the two countries. It reached a boiling point after a targeted U.S. airstrike killed Iranian Maj. Gen. Qasem Soleimani earlier this year. Iran retaliated by firing missiles at U.S. targets in Iraq a few days later.

Rouhani said he doesn't think the U.S. wants to pursue a war with Iran, as the move would be harmful to its interests in the region and "ruin" President Trump's chances of winning in 2020.