Iran's President Tells Government To Get Ready For Uranium Enrichment 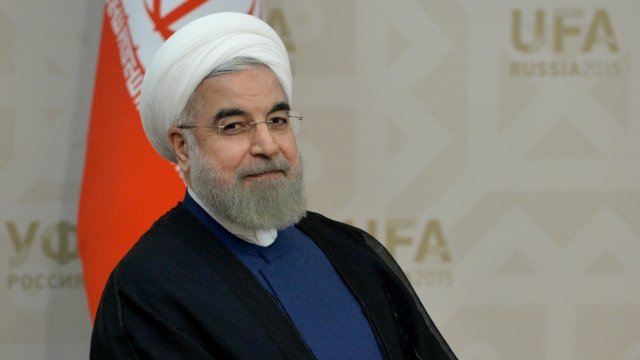 SMS
Iran's President Tells Government To Get Ready For Uranium Enrichment
By James Packard
By James Packard
May 8, 2018
Hassan Rouhani was on TV just minutes after President Donald Trump announced the U.S. was pulling out of the Iran nuclear deal.
SHOW TRANSCRIPT

Iranian President Hassan Rouhani says he's instructing his government to be ready to ramp up uranium enrichment after the U.S. pullout from the Iran nuclear deal.

Rouhani was on state TV just after President Donald Trump announced the withdrawal. Rouhani called the U.S. "unfaithful" and said Trump is not to be trusted. He painted the U.S. as noncommittal from the beginning of the arrangement.

The threat of uranium enrichment hinges on Iran's agreement with the countries that are still in the deal: the U.K., France, Germany, Russia and China. Rouhani said his country will stay in the deal if Iran's interests are guaranteed even without the U.S. involved.

Rouhani said he'll consult with the remaining countries and wait a few weeks before taking steps to respond.