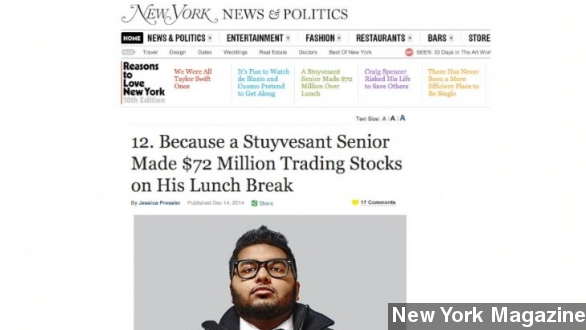 A magazine runs a story about a teen investor who's $72 million rich. Only problem is that figure is off by about $72 million.

Media were clamoring over a story in New York Magazine Sunday about 17-year-old Mohammed Islam. The mag said he made $72 million by investing in penny stocks during his high school lunch hour.

The story was so intriguing, CNBC reached out to interview Islam and his friends. That's when things started unraveling.

"We invite him out here. My executive producer Lydia Thew actually met with him when he came in here and said, 'Look, let's see some trading statements.' Couldn't produce them. 'What are your best trades?' Couldn't name them," CNBC host Scott Wapner says.

Islam backed out of the CNBC interview, and by the day's end, out of his entire story.

After hiring a PR firm, Islam sat down with the New York Observer and said he'd made absolutely no money from investing.

The Observer's reporter asked him, "Where did [New York Magazine reporter] Jessica Pressler come up with the $72 million figure?"

Islam answered: "I honestly don't know. The number's a rumor."

Islam replied, "[I led her to believe] I had made even more than $72 million on the simulated trades."

So, according to the Observer, Islam "led her to believe" he'd made that money — but reporters and media outlets are supposed to check their facts.

Islam had never confirmed the $72 million and it's unclear where the number came from. New York Magazine's original article said he did confirm his net worth was in the "high eight figures."

In an updated article Tuesday, New York Mag says it did indeed fact check, sending someone to verify Islam's claims. The magazine says that person was shown what looked like a legitimate Chase bank statement with eight figures.

But The Washington Post, citing an anonymous source close to the Islam family, says Islam created the document on a computer, blacking out numbers and pulling the paper away from the reporter after a few seconds.

So Islam claimed he had money he didn't actually have and the paper ran with it. With the story basically a total loss, it's getting compared to another recent, infamous journalistic bombshell that, more or less, bombed.

We're talking about Rolling Stone's University of Virginia fraternity rape story posted in November. The story, which detailed an alleged 2012 gang rape of a woman identified as "Jackie" at a fraternity house, quickly prompted school leaders to shut down all Greek activities for the semester.

But in the weeks after the story was published, Jackie's account was brought into question.

Rolling Stone later apologized to readers and "anyone affected by the story" weeks later.

As for Islam, he's said he's sorry for his statements to New York Magazine. The outlet has revised its headline, added updates to its story since the revelations and apologized for the errors.