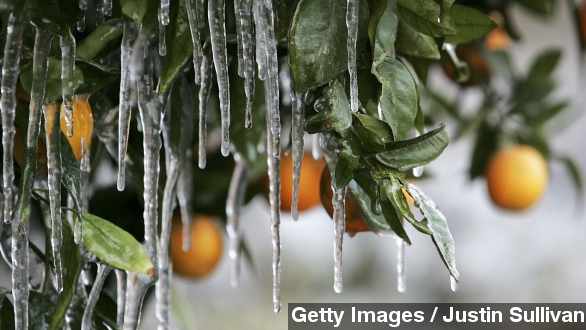 Fresh oranges from the Sunshine State could be hard to come by as record-breaking frigid temperatures are threatening harvests.

And winter's grasp doesn't seem to be letting up, as there are freeze warnings and wind chill advisories throughout the state.

One tactic farmers are using to keep the crops relatively warm is to spray the trees with water, which will then freeze and provide a protective barrier from the harsh cold and wind.

But there is a problem that could make this an issue for future seasons as well — the freezing tactic doesn't work on the flowers that oranges grow from. Marty McKenna, an orange grower and chairman of the Florida Citrus Commission told NBC, "It's highly unusual and I can't remember a cold snap hitting when the trees were already flowering like this." Those blossoms are meant to help supply next year's crop.

And the cold isn't the only thing the orange industry has to worry about. In California, boxes of ready-to-ship oranges and apples are being left to rot on the docks.

That's because thousands of dock workers are on strike while negotiating a new contact with employers. The shutdown could have a huge monetary impact.

"​Washington State scored its biggest apple harvest in history this year, and growers were anticipating huge sales in China. ...  Instead, producers are dumping spoiled apples into canyons," reported CNN.

That issue is expected to continue until those workers and their employers have reached an agreement.