Rosie O'Donnell Finally Found A Trump She Can Tolerate 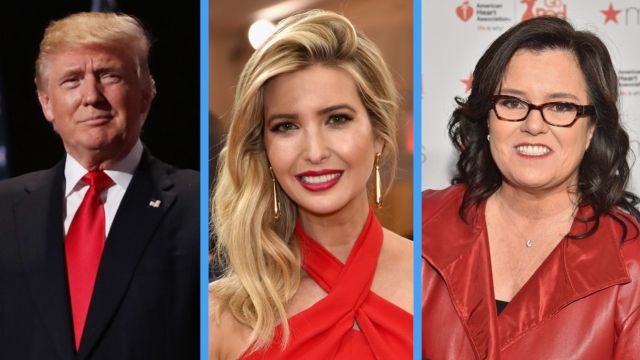 "Somebody who's been very vicious to me — Rosie O'Donnell — I said very tough things to her, and I think everybody would agree that she deserves it, and nobody feels sorry for her," Donald Trump said during the first of three presidential debates with Hillary Clinton.

Flash forward one week to a chance run-in between Rosie O'Donnell and Ivanka Trump at a New York City sushi restaurant.

Umm, awkward and uncomfortable are just a few of the adjectives that come to mind.

But according to the comedian, the encounter went well — the two even had a conversation "mother 2 mother," as O'Donnell put it.

The idea that the two had even a remotely pleasant conversation got the attention of Twitter — where the feud between Donald Trump and O'Donnell has captivated followers for years.

The public spat appears to have started way back in 2006. O'Donnell called Trump "a snake-oil salesman" while discussing Trump's decision to let Miss USA keep her crown.

"And there he is, hair looping, saying, 'Everyone, everyone deserves a second chance.' ... Left the first wife. Had an affair. Left the second wife, had an affair. Had kids both times, but he's the moral compass for 20-year-olds in America," O'Donnell quipped on ABC's "The View."

Trump responded, calling O'Donnell "a real loser" and "fat little Rosie" while threatening to sue her.

Ever since, O'Donnell and the now-presidential candidate have had a roller-coaster relationship.

Trump actually supported O'Donnell in her spat with her "The View" co-host Elisabeth Hasselbeck in 2007.

But a few years later, the feud reignited when Trump said — of course on Twitter — he felt bad for O'Donnell's fiancée. O'Donnell's response was lacking in the tact department.

While the two seemed to be on somewhat better terms following O'Donnell's 2012 heart attack, the improvement was short-lived.

Since 2014, when O'Donnell returned to co-host "The View," respect really hasn't existed between the two.

"You've called women you don't like 'fat pigs,' 'dogs,' slobs' and 'disgusting animals,'" Fox News debate moderator Megyn Kelly said in 2015 when asking Trump about comments he has made about women.

The comedian has been tweeting about Trump's comments about her and other women since the campaign kicked off last year.

Trump told KSNV on Wednesday his comments about women's appearances has largely been for entertainment.

"There's nobody, nobody that has more respect for women than I do," Trump said.