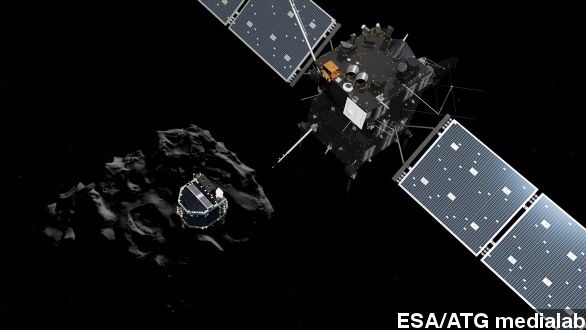 For the first time in history, a human spacecraft is about to attempt a soft landing on a comet.

The European Space Agency’s Rosetta mission has released its Philae lander above Comet 67P/Churyumov–Gerasimenko, after a 10-year trip out. (Video via CNN)

Philae left Rosetta at around 3:35 a.m. EST. It’s now in an unpowered descent toward the comet surface. Confirmation of landing is expected around 11 a.m. (Video via NBC)

Until then though, the scientists must sit through what one characterized as “seven hours of terror.” Much of Philae’s descent and landing is unproven: based on theory and assumption. (Video via ESA)

During the design and launch of the mission, scientists didn’t have much to go on. They told NPR they expected the comet would be “some more-or-less-roundish potato shape.”

Instead they got a bulbous, irregular rock the size of Mount Fuji, with 500-foot cliffs and boulders scattered around the landing zone. They’ll hope Philae can miss all those — and then land using technology designed 20 years ago.

“Each of its three legs is fitted with a screw, to drive into the ground. And it has two harpoons. They’ll be fired down, to help keep a grip.” (Video via BBC)

To make things more stressful, reports indicate a thruster on the top of Philae that would have helped push it down onto the comet surface after landing is malfunctioning.

But you don’t spend ten years driving out to a comet just to turn around because one bit of tech fails.

The European Space Agency is pressing on. It’s livestreaming mission control on its website and updating Twitter with progress reports from Philae. Even XKCD is updating live.

Assuming it does land, Philae’s first images from the surface should arrive about two hours after touchdown.