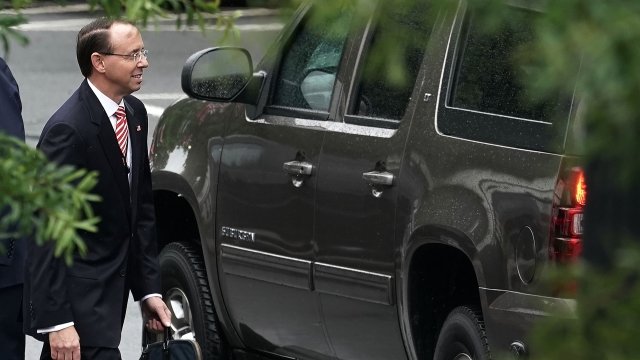 By Alexandra Miller
September 24, 2018
President Trump is set to meet with Deputy Attorney General Rod Rosenstein on Thursday to discuss his future at the DOJ.
SHOW TRANSCRIPT

Media reports said he resigned, then that he was fired, then that he was staying — for now. That was Deputy Attorney General Rod Rosenstein's Monday morning. The fate of the man overseeing the Mueller investigation remains uncertain, and with it, the future of the probe into the Trump campaign's potential ties to Russia.

Former Department of Justice prosecutor Dan Petalas says Rosenstein's departure would not necessarily mean the investigation would be shut down, but the essence of it could be completely altered.

"Mueller is appointed with special counsel regulations. He's not an independent counsel. So in other words, when he takes certain steps he considers significant, he's required to get approval, so there are ways for a hostile or skeptical appointee to slow down or chill investigative steps," Petalas said.

The president has made it clear he's unhappy with Rosenstein's supervision of the investigation. Rosenstein took over the Russia investigation after Attorney General Jeff Sessions recused himself, a move that infuriated the president and led to a hostile relationship with the DOJ.

Noel Francisco would be next in line for the job. His appointment may quell some of the president's concerns about the Mueller probe.

"His pedigree is one who would appeal to Trump and his base," Petalas added.

Francisco is the solicitor general. He's argued cases at the Supreme Court, including the travel ban case, the Masterpiece Cakeshop and a voting rights case, all on behalf of the Trump administration. He also argued against the Obama administration in a case relating to health care.

However, Francisco may face some ethical issues if he takes the job. He and Don McGahn, the current White House counsel, used to be partners at the law firm Jones Day.

"Jones Day reportedly represents the Trump administration in the investigation that Francisco would be overseeing," Petalas said. "So there would have to be some waivers and ethical considerations reviewed before he could take the job."

It also depends how Rosenstein exits — that may determine if the president gets a pick at all.

"That power depends on the nature of the vacancy. There's a pending legal question whether that's not been answered whether a vacancy created by the president, if he fires someone, whether he can fill a vacancy, or if we can only fill based on a resignation," Petalas said.

Rosenstein's departure is far from certain at this point. The White House will have to gauge the political price of getting rid of the deputy AG. Rosenstein is set to meet with the president Thursday.