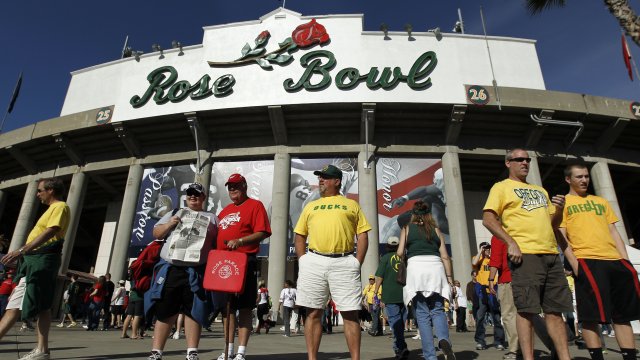 SMS
Rose Bowl Semifinal Game Moved to Texas
By Alex Arger
By Alex Arger
December 20, 2020
The game was supposed to be played at Pasadena's Rose Bowl on January 1 as it has for the last 77 years.
SHOW TRANSCRIPT

For the first time since World War II, the Rose Bowl will not be held in Pasadena, California. The College Football Playoff semifinal scheduled there for New Year's Day is moving to Texas.

The 77-year-streak is being broken as the Tournament of Roses decided to play at the Dallas Cowboys' AT&T Stadium...citing California virus numbers and a ban on spectators.

Its CEO said, "While we remain confident that a game could have been played at the Rose Bowl Stadium, as evident in the other collegiate and professional games taking place in the region, the projection of COVID-19 cases in the region has continued on an upward trend."

The Tournament also noted L.A. County's medical resources are already strained, adding the well-being of the college football players are the top priority.

California health officials had denied two appeals from Rose Bowl representatives to allow 400 to 500 family and friends of the participants to attend.

The Rose Bowl was last played away from the stadium in 1942 due to fears of a Japanese attack on the West Coast after Pearl Harbor.

The annual parade that draws millions of TV viewers has also been canceled but the Tournament of Roses will present live and taped performances on ABC-TV on New Year's Day.