Romney Is Coasting To A Utah Senate Seat. How Will He Deal With Trump? 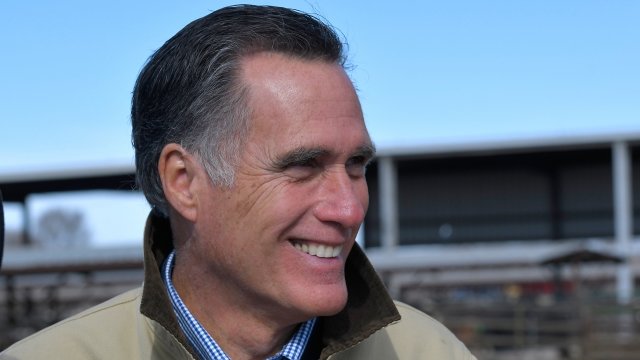 SMS
Romney Is Coasting To A Utah Senate Seat. How Will He Deal With Trump?
By Eugene Daniels
By Eugene Daniels
June 25, 2018
Mitt Romney said in an op-ed he plans to call out the president for "divisive, racist, sexist, anti-immigrant, dishonest" acts.
SHOW TRANSCRIPT

Mitt Romney is in the heavy favorite in Utah's Senate race. And his current campaign gives us some hints about what kind of Republican the former never-Trumper will be if and when he gets to Washington.

In a recent op-ed for The Salt Lake Tribune, Romney said he would be supportive of the president's policies when they were good for Utah, but that, "I have and will continue to speak out when the president says or does something which is divisive, racist, sexist, anti-immigrant, dishonest or destructive to democratic institutions."

This isn't surprising at all, since Romney is the OG Never Trump. The two seemed to eventually patch things up, but Romney has continued to be outspoken on the president's rhetoric.

"If he's elected, it looks like he's going to come in as not a Never Trumper but an OK Trumper. He'll be somewhat between a cross of Lindsey Graham and Jeff Flake. He'll be critical as well as be supportive of things like tax policy," Thomas Burr, the Salt Lake Tribune's Washington, D.C., bureau chief, told Newsy recently.

Romney's approach is something other congressional Republicans have had trouble pulling off, especially in deep red Trump-supporting states. But Romney is especially popular in Utah, leading his nearest Republican challenger 65 percent to 23 percent in a recent poll taken ahead of Utah's GOP primary. So he can afford to criticize Trump without worrying about a massive voter revolt.

Romney is expected by just about everyone to sail to victory come November. And by the looks of things now, he probably isn't going to change his approach when it comes to Trump anytime soon.

"It's where Romney can look like the statesman if he gets elected, and Trump will be Trump," Burr said.