Most Rohingya Refugees In Bangladesh Are Refusing To Return To Myanmar 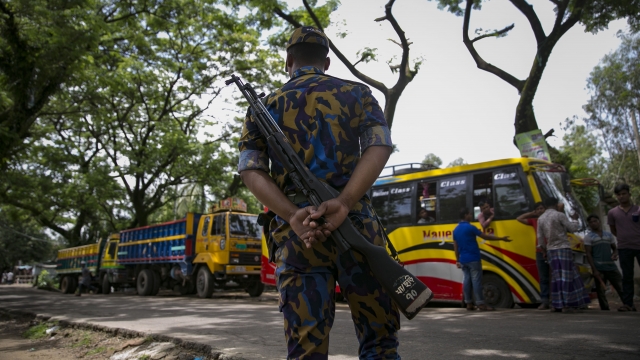 SMS
Most Rohingya Refugees In Bangladesh Are Refusing To Return To Myanmar
By Peter Hecht
By Peter Hecht
August 22, 2019
Two years ago, a military campaign forced more than 740,000 Muslim-minority Rohingya out of Myanmar. They are largely refusing offers to return.
SHOW TRANSCRIPT

Two years ago, more than 740,000 people fled the South Asia country of Myanmar in the face what the U.N. branded a "textbook example of ethnic cleansing." The Muslim-minority Rohingya took refuge in camps in neighboring Bangladesh.

Now a few thousand of those refugees have an offer to return under a U.N.-supported repatriation effort. But Thursday, buses at Bangladesh's largest refugee camp stood largely empty on the first day of the program, offering a vivid statement on the Rohingyas' fear and distrust about returning.

Sunday marks the two-year anniversary of a Myanmar military campaign targeting the Rohingya in that country's Rakhine state. The military said it was conducting an anti-terrorism campaign. Human rights groups said villages were sacked and burned, women and girls were raped and hundreds of people were killed.

In an effort to permit some of those refugees a safe passage home, the Bangladesh government recently requested that Myanmar allow the return of 22,000 people from its largest refugee camp. Myanmar approved some 3,500 to come home, with the U.N. High Commissioner for Refugees helping in the repatriation.

Rohingya leaders disputed that any refugees signed up to return and questioned how Bangladesh gathered the names. And Amnesty International says repatriation is a non-starter.

In a statement Wednesday, the human rights group said: "Bangladesh and Myanmar's recent proposal to repatriate thousands of Rohingya has triggered widespread fear in the refugee camps. "Memories of murder, rape and torched villages are still fresh in the minds of Rohingya refugees."

The Rohingya remain a people without a country. They are not allowed to work and their movements are restricted in Bangladesh. Meanwhile, they are denied citizenship in Myanmar.

While some have expressed a desire to return, they are demanding citizenship, recognition as an ethnic group and protection from persecution. Additionally, Rohingya leaders are seeking return of community lands and homes and punishment of military officials for human rights abuses.

Until then, one refugee told Al Jazeera news: "I would rather commit suicide than go back to Myanmar."