Rohingya Muslims Might Not Be Headed Back To Myanmar After All 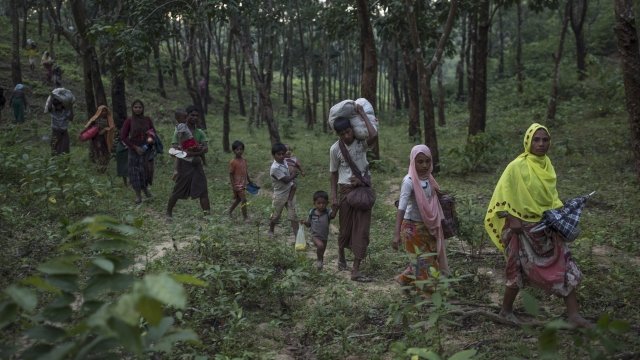 SMS
Rohingya Muslims Might Not Be Headed Back To Myanmar After All
By Katie Cammarata
By Katie Cammarata
November 15, 2018
Myanmar and Bangladesh struck a deal last month to start repatriating roughly 700,000 Rohingya.
SHOW TRANSCRIPT

Rohingya Muslims living in refugee camps in Bangladesh may not be headed back to Myanmar after all.

The head of Bangladesh's refugee commission told The Associated Press repatriation plans were scrapped after officials couldn't find anyone who wanted to go back. He said they can't force the Rohingya to go back but would try to "motivate them so it happens."

Myanmar and Bangladesh struck a deal last month to start repatriating roughly 700,000 Rohingya who have been living in overcrowded camps in Bangladesh after fleeing Myanmar military crackdowns in August of 2017. The first group of 2,251 refugees was supposed to start heading back — about 150 people a day — starting in mid-November.

Human rights groups have expressed concerns about the repatriation, warning that sending the Rohingya back to Myanmar could lead to further human rights violations.

A 440-page U.N. report released in September detailed what it called "the gravest crimes under international law." The report found "clear patterns of violations by the Myanmar military," including killing thousands of Rohingya civilians and burning hundreds of settlements.

Myanmar and Bangladesh made a similar repatriation agreement last November, but it fell through, and both sides blamed each other for the delay.