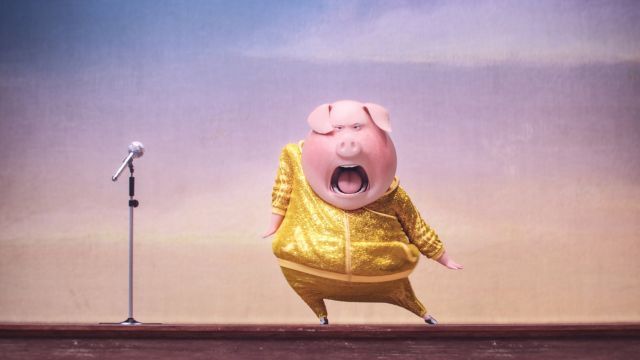 SMS
'Rogue One' Hogs 'Sing's' Spotlight
By Matt Picht
By Matt Picht
December 27, 2016
"Rogue One" proves its staying power, "Sing" shines in its debut and "Passengers" gets some odd looks from critics.
SHOW TRANSCRIPT

"The power that we are dealing with here is immeasurable."

But if we had to put a price tag on it, the power of a holiday weekend seems to be worth an extra $30 million.

"Rogue One: A Star Wars Story" hasn't budged from its top spot at the box office, bringing in an estimated $96 million over the four-day weekend. About a third of that total came from ticket sales on Monday, which was a holiday for many people.

In its second week, the "Star Wars" offshoot has already grossed over $500 million worldwide. That's an outstanding performance for most movies but still a few light years behind its predecessor.

On to No. 2, and the one thing that could go toe to toe with "Star Wars": a singing competition.

The top new release this weekend was Universal Pictures' "Sing," which pulled in a respectable $56 million over four days.

The animated feature has already made back its budget domestically, and fairly positive reviews should bolster its total over the next few weeks. And it's still probably not going to be Universal's biggest animated film about talking animals this year, either.

For No. 3, the sci-fi romance/occasional thriller "Passengers" brought in an underwhelming $23 million over the four-day weekend.

Sending Chris Pratt and Jennifer Lawrence into deep space doesn't seem to have worked out like Sony Pictures wanted. Critics ended up panning the film, hitting it over the somewhat creepy subtext of its main romance.

As for next week, Adam Driver drives a bus around New Jersey for two hours — and it's already getting rave reviews.