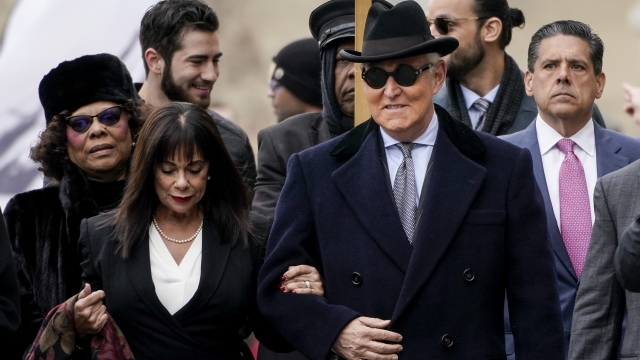 Roger Stone, President Donald Trump's longtime associate, has been sentenced to 40 months behind bars and a $20,000 fine. A jury convicted him last year on seven counts of obstructing a congressional inquiry, lying in that inquiry, and witness tampering.

At the sentencing hearing on Thursday, Stone's attorney reminded the court that despite Stone's "larger-than-life persona," he's a "real human being." He urged the court to consider Stone as a whole person, not just his persona.

But Judge Amy Berman Jackson wasn't buying it. She said: "At his core, Mr. Stone is an insecure person who craves and recklessly pursues attention. Nothing about this case was a joke. It wasn't funny."

The inquiry involved Stone's interactions with WikiLeaks during the 2016 election. Federal prosecutors had asked Jackson to sentence Stone to up to nine years. In a sentencing memo, they said: "Stone's actions were not a one-off mistake in judgment. Nor were his false statements made in the heat of the moment. They were nowhere close to that."

The request sparked a reaction from President Trump, who called the sentence recommendation a "miscarriage of justice." Soon after the president's tweet, the Department of Justice reduced the recommended sentence. The quick chain of events spurred the withdrawal of all four federal prosecutors on the case.

More than 2,000 former DOJ officials called for Attorney General William Barr to resign. Barr reportedly considered stepping down, and said the president's tweets made his job "impossible." But the Justice Department has said there are no plans for Barr to leave.

Shortly after the sentencing, a spokesperson for Stone issued a statement saying the trial lacked integrity because of partisan "Juror misconduct." The spokesperson said President Trump should pardon Stone as "the final means of checks and balances."

Stone's team filed a motion for a new trial last week. He won't be detained until the judge rules on the request.