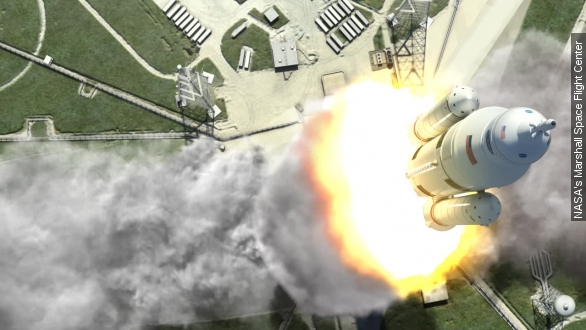 SMS
Rocket Science: Building And Testing The Space Launch System
By Evan Thomas
By Evan Thomas
April 19, 2015
NASA's new rocket system will eventually be the most powerful ever built by man, but there are a lot of moving parts to test first.
SHOW TRANSCRIPT

NASA's Space Launch System isn’t off the ground yet, but the agency is hard at work getting it ready to send humans into the solar system in the next decade.

It will be the biggest advance for the U.S. space program since the space shuttle days, and the first exploration-class vehicle to carry humans out of low Earth orbit since the Apollo missions.

With the SLS, NASA is on track to build the most powerful rocket ever launched. For comparison, the space shuttle could take 53,600 pounds into low Earth orbit.

The Saturn V, which took astronauts to the moon and is the single most powerful rocket ever constructed by man, could launch 260,000 pounds the same distance.

The final version of the Space Launch System is expected to beat even that monster by almost 30,000 pounds.

Block I will borrow the proven tech of engines and solid rocket boosters from the shuttle program, attach them to a newly developed core stage and stick a crew module on top. Total capacity it could take into low Earth orbit: 154,000 pounds.

The next phases, Block IB and Block II, will add the exploration upper stage and a larger payload fairing, respectively. The most powerful versions will be able to take almost 290,000 pounds to low Earth orbit, using advanced booster rockets that haven’t even been developed yet.

The goal is to eventually support enormous payloads. NASA is looking at everything from nuclear rockets for interplanetary travel, to deep space habitats, to the fuel and supplies astronauts would need for a trip to Mars.

Astronauts will ride aboard the SLS in Orion, NASA's new crew capsule.

Think of it like a modernized Apollo crew module. It's got the same basic shape and re-enters the atmosphere the same way, but it can carry four astronauts, and NASA says it can support them for more than 200 days. Perfect for long-duration missions. (Video via NASA)

We've already seen it in space during Exploration Flight Test 1 in December. NASA sent it to orbit aboard a Delta IV rocket to test its critical systems and demonstrate its space-worthiness.

But before Block I can launch, NASA's engineers have to make sure each component does its job. (Video via NASA’s Marshall Center)

The solid fuel mixes are working.

And the booster housings are working as intended — technically.

Tests like this one subject parts to forces way beyond what they're expected to sustain during a rocket launch to make sure they'll hold up. That is to say, they can do this and be fine. (Video via NASA’s Marshall Center, NASA)

All of these parts are expected to come together within three years. NASA's planned Exploration Mission 1 will test sending an unmanned Orion capsule into lunar orbit.

And Exploration Mission 2 would send a crew of four astronauts to lunar orbit for four days to rendezvous with an asteroid that will be captured and placed in a stable orbit in the Earth-moon system. It marks the first of SLS' manned missions and is slated for sometime in the mid 2020s.