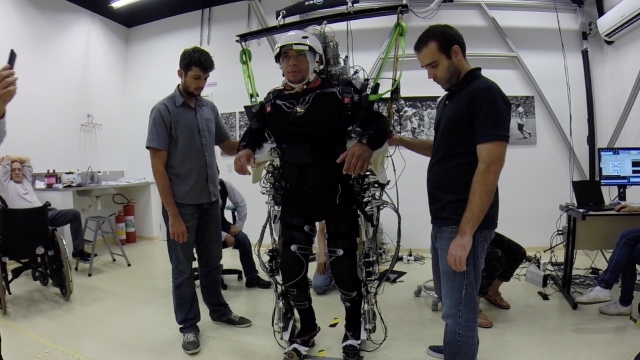 For decades, scientists have tried to build machines that can scan a person's brain and translate their thoughts into movement. The research has had some success, offering rare hope that paralyzed people or amputees might one day be able to move and walk again just by thinking.

But researchers in Brazil and the U.S. weren't expecting to see their test subjects actually get better. In an incredible first, people who were completely paralyzed regained some natural control over their own bodies — all by training to work with robots.

All eight of them regained some ability to feel sensations and contract muscles in their lower limbs; some could move their legs again. Four patients improved so much that doctors revised their clinical status from complete to partial paralysis.

What's more, participants regained some control over bladder, bowel and even sexual functions, which can have a huge impact on quality of life.

The team wasn't expecting this. Some subjects had been considered completely paralyzed for more than a decade. The researchers said when the training started, the subjects' brains had basically erased leg movement from their toolkits.

"These patients may have been able to transmit some of this information from the cortex through the spinal cord through the very few nerves that may have survived the original trauma. It's almost like we turned them on again," said lead researcher Miguel Nicolelis.

The same group of patients is approaching two years of therapy now, and while the results aren't published yet, they've reportedly continued to improve. Next, the scientists want to test using their program as a treatment — on purpose this time.