Robot Sidewinds Like A Real Snake To Climb Sandy Slopes 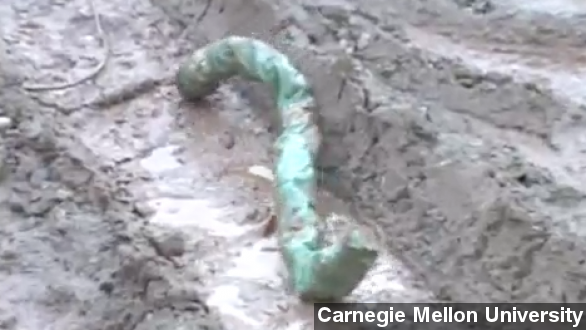 By Evan Thomas
October 10, 2014
Researchers say the robot flattens its body so more is in contact with the ground as it climbs. This could mean big things for space exploration.
SHOW TRANSCRIPT

Researchers from the Georgia Institute of Technology, Carnegie Mellon University, Oregon State University, and Zoo Atlanta tapped into the power of Mother Nature to solve a robotics problem.

The goal was to mimic this behavior — certain snakes’ ability to climb sandy slopes by sidewinding their way up. (Video via Animal Planet)

The BBC explains it’s harder than it looks. The steeper the slope, the more likely the sand will start slipping. “Getting enough purchase without making too much sand flow downhill is a delicate balancing act.”

The researchers found sidewinders climb those sandy slopes by “simply increasing the amount of their body area in contact with the granular surfaces they're climbing.”

Using that knowledge, the researchers were able to get the robotic snake — which was once only able to travel across level ground — to climb sandy surfaces. (Video via Carnegie Mellon University)

It’s still not quite as graceful as the real thing, but the team says with enough refinement the robot will be able to handle all kinds of terrain — including extraterrestrial terrain.

DR. JOE MENDELSON, ZOO ATLANTA: “Robots are expensive, and a robot gets stuck in the sand — that’s a problem. Especially if that sand happens to be on another planet.” (Video via Georgia Tech)

The team has published its research in the journal Science.

This video includes footage from ensiematthias / CC BY NC SA 2.0.