Robin Thicke To NYT: "I Know I Have A Target On My Back" 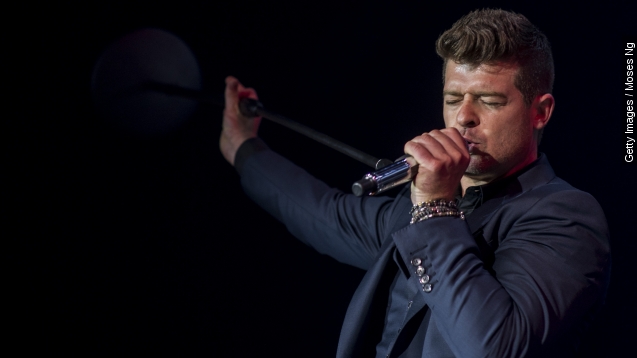 Robin Thicke has spoken out for the first time since his copyright infringement lawsuit against the megahit song "Blurred Lines" ended in March.

Wednesday, the singer told the New York Times he "didn’t give [his] all to the trial" because "it simply wasn't as important to [him] as what was going on in [his] personal life."

Of course, Thicke is referring to his very public divorce from Paula Patton.

Months following the split, Thicke desperately tried to "get her back." (Video via Star Trak / Robin Thicke)

From making an entire album called "Paula," to song dedications at the 2014 BET Awards and during his concerts, all to no avail.

"The album is exactly what happens when you lose the love of your life and you’re trying to figure it out in your head." (Video via HOT97)

"I'd like to dedicate this song to my wife, I miss you and I love you." (Video via BET Networks)

"But I want everybody here to know that I'm trying to get my girl back." (Video via YouTube / kbaby82)

The divorce was finalized in March in the midst of his "Blurred Lines" lawsuit.

So yeah, saying you were distracted is an understatement, Robin.

Regardless, both Pharrell and Thicke had to cough up nearly $7.4 million to three of Marvin Gaye's children after a Los Angeles jury said they had copied parts of "Got to Give it Up," a 1977 Marvin Gaye hit.

But even though the lawsuit is over, Thicke maintains his innocence.

He told the New York Times there is a "difference between being inspired and stealing."

"Why would I want to, or have to, steal from anybody to make my music? Inspiration can be subliminal. As a songwriter, you’re obviously trying to create a brand-new feeling that comes from your heart. But you can’t help but be inspired by all of the greatness that came before you."

And now, he's taking extra precautions to protect himself. He gave Barry White co-writing credits for his song "Morning Sun" because, as he told the Times, "I have a target on my back, and my team wanted to be extra cautious."

And Thicke isn't the only one. Since the lawsuit, publishers are making sure to give credit when there is the slightest red flag of possible infringement.

Sam Smith paid songwriting royalties to Tom Petty for his song "Stay With Me" because the melody mirrors Petty's "I Won't Back Down."

And after listeners started noting a resemblance between Mark Ronson's song "Uptown Funk" and the Gap Band's "Oops Up Side Your Head," credits were given to the latter. Vulture also said the Gap Band got "17 percent share of the ‘Uptown Funk’ publishing royalties." (Video via Sony Music Entertainment / Mark Ronson)

Thicke is appealing the jury's decision. You can read more of his interview in the Times article.