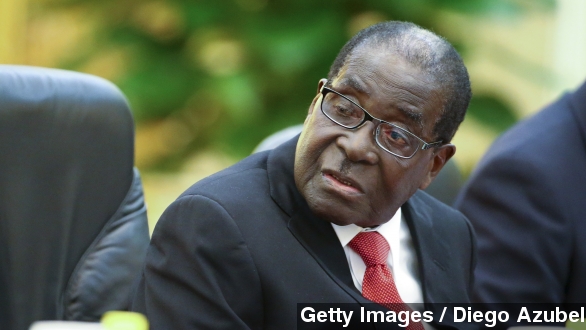 What do you get the man who's spent the last 35 years running your country with an iron grip for his birthday? For one Zimbabwean game farmer, the answer was obvious: elephants!

Zimbabwean president Robert Mugabe celebrated his 91st birthday Saturday in his usual fashion — with a lavish $1.3 million party organized by his political party. An estimated 20,000 guests flocked to Victoria Falls to commemorate Mugabe's 35 straight years in power, since the country won independence in 1980. (Video via SABC)

Game farmer Tendai Musasa told local outlets last week he would donate several wildlife trophies to Mugabe, including the meat from two elephants to be served at the President's party. The news immediately sparked backlash from environmental groups and Zimbabweans outraged at the show of excess.

A former revolutionary who helped spearhead Zimbabwe's escape from British colonial rule, Mugabe has since become an international pariah for his ruthless oppression of dissent, and a land redistribution program that many observers blame for the collapse of the country's economy.

Mugabe's latest soiree raised some familiar questions about the wisdom of spending over $1 million on a party in a country where 70 percent of the population lives below the poverty line.

Opposition leader Nelson Chamisa told Al Jazeera, "I think it's un-African to have a birthday party when there's a funeral in the community."

There's no word on whether the meat was actually served at the festivities, so it could be that Mugabe heeded the condemnation from the environmentalists after all.

It's also possible Mugabe's advisors discovered what a writer for The Awl concluded in 2012 when he poured over historical accounts of elephant consumption; "Apparently, elephant tastes like Spam." (Video via The Guardian)