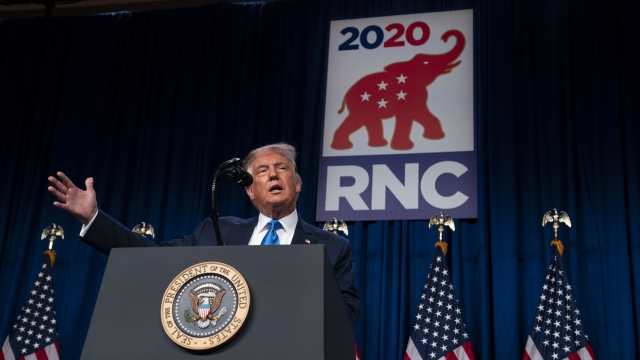 Republicans have kicked off their convention, painting a dark vision for America under Joe Biden.

"If we let them, they will turn our country into a socialist utopia. And history has taught us that path only leads to pain and misery," said Sen. Tim Scott, R-S.C., the only Black Republican in the upper chamber.

Down in polls to Joe Biden, President Trump is looking to use the convention to re-energize supporters ahead of the fall. Part of that involves convention speakers highlighting cultural issues.

"Make no mistake: no matter where you live, your family will not be safe in the radical Democrats' America," said Patricia and Mark McCloskey, the Missouri couple who waved guns at Black Lives Matter protesters outside their St. Louis home.

Monday's lineup included Patricia and Mark McCloskey, the Missouri couple who pointed guns at Black Lives Matter protesters outside their St. Louis home. And Tuesday: Nick Sandmann, the student who sued media outlets that portrayed him as mocking a Native American protester. It's a message meant to resonate with the president's most enthusiastic supporters, but could give rise to division over unity.

"In the current environment, there are enough voters on both sides who are energized by those cultural issues — very unlikely that you can turn them off. This is not going to be a pure personality contest between these two. It's about two very starkly different views of America," explained Alex Vogel, the former deputy counsel of the Republican National Committee.

The Republican National Convention comes one week after Democrats presented their plans for the country in a four-night event that focused heavily on appealing to moderate Republicans and dissatisfied supporters of President Trump.

"This is our moment. This is our mission. History should be able to say that the end of this chapter of American darkness began here tonight," Democratic presidential nominee Joe Biden said last week while addressing the Democratic National Convention.

Democrats last week did issue dire warnings of their own about what four more years of the current administration could mean.

"Donald Trump hasn't grown into the job because he can't," former President Barack Obama said last week during his speech at the Democratic National Convention.

Now the president is sending an equally urgent message about what's at stake.

"This is the most important election in the history of our country," the president said Monday while addressing the GOP convention.

"The fact that we are now non-stop telling people — again, on both sides of the aisle — that if this doesn't go your way, it's literally the end of civilization. That dynamic is new," said Alex Vogel, the former deputy counsel of the Republican National Committee. "I'm not sure post-Donald Trump, post-Joe Biden — obviously there’s lots of other people who will run and be president someday — I don't know how easy it is to put that genie back in the bottle."