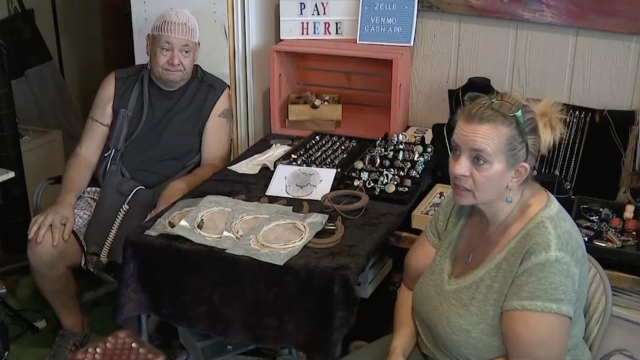 One man and his wife downsized and sold most of their belongings to pay for his medical costs as he fights brain cancer.

Andrew Kuzyk and his wife, Pamela Andersen, held a yard sale in August.

The couple from Mesa, Arizona, downsized and sold most of their belongings to pay Andrew's medical costs as he fights brain cancer.

"If I lose my best friend and the love of my life ... I'm just thinking of that and how the future will look," Andersen said.

112 million Americans struggle to pay for health care. More than 90% of the country  thinks it's too expensive, according to a March 2022 Gallup Poll.

The Centers for Medicare and Medicaid project yearly U.S. health care spending will hit $6 trillion in the next 5 years. That's 50% more compared to 2020.

Someone's health costs, especially insurance, can depend on several factors like age, location and plan.

A Kaiser Family Foundation analysis of people with employer insurance found a single person's average premium cost was $7,470 for a year in 2020.  A family's premium was $21,342 for the year.

KFF's analysis for 2022 is not out yet, but other reviews found less than a 1% increase.

Those with Medicare Part B will pay about $5 less per month for their premiums starting January 2023. That will help after last year's jump of more than $20 a month.

Medicare Part B covers doctor visits and outpatient care for someone over 65, or with a disability or on dialysis.

Legislation passed in August also gives Medicare the power to negotiate drug costs, but that won't come until 2025 or 2026.

"They'll probably be those really high-cost drugs about less than 2% are so expensive they are consuming about 50% of the prescription drug spent,"Executive Director for Colorado's Department of Health Care Policy and Financing Kim Bimestefer said.

Meanwhile, for patients like Kuzyk and his wife, they'll continue to pay as they battle for health.

"We have a lot of faith and he's going to fight to the end," Andersen said.