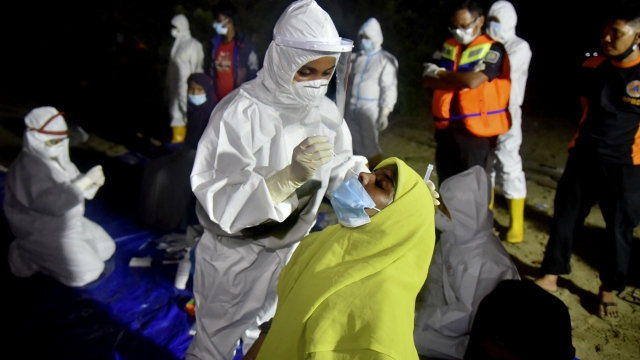 The rates of COVID-19 infections and deaths continue to plummet in U.S. And worldwide, cases are down 15%. But the virus is picking up again in some global regions, raising concerns that the pandemic isn't ending any time soon.

While new infections in the U.K. remain far lower than the worst days of the pandemic, the numbers are spiking again. Health officials blame a fast-spreading virus variant first detected in India. Some 100,000 people tested positive in the U.K. in the last week of May. That was a two-thirds increase over the previous week.

The variant discovered in India has now been reported in 62 countries. Another virus mutation, first detected in Japan, has spread to 64.

"So I believe we should trust in our vaccines to protect the public whilst monitoring the situation as it develops very closely, because the race between our vaccination program and the virus may be about to become a great deal tighter," said British Prime Minister Boris Johnson.

Malaysia and Vietnam, two countries that had avoided severe pandemic impacts, are suddenly seeing a surge in new cases. The Philippines is hard-hit and is experiencing the second-worst outbreak in Southeast Asia - behind Indonesia. A shortage of vaccines in those countries is worsening the virus spread.

On Thursday, the Biden administration announced a plan to share at least 80 million vaccine doses with other countries over the next month.

"Our goal in sharing our vaccines is in service of ending the pandemic globally," Jake Sullivan, National Security Adviser, said.

That could be good news for countries in Latin America, including many facing shortages in vaccines. Peru has the world's highest current COVID-19 death rate and fewer than 7 percent of its residents have been vaccinated. The death toll is also accelerating in Brazil, which on Wednesday reported its second highest infections in a single-day. But cases are dropping dramatically in limited Brazilian cities with successful vaccine roll outs.

"We have the means to end this pandemic quickly and save countless lives and livelihoods," said Tedros Adhanom Ghebreyesus, director of the World Health Organization

In the U.S., more states are changing their COVID-19 protocols. After seeing a 43% drop in cases and deaths, Florida is now replacing its daily case and vaccine updates with weekly reports. New York is going to eliminate its indoor mask-wearing rules for schools.

But infections among teens remains a cause for worry in the U.S.  CDC Director Rochelle Walensky says she's "deeply concerned" over the number of adolescents hospitalized in March and April. She's urging parents to vaccinate their kids. The CDC is recommending the Pfizer vaccine for people 12 and older.