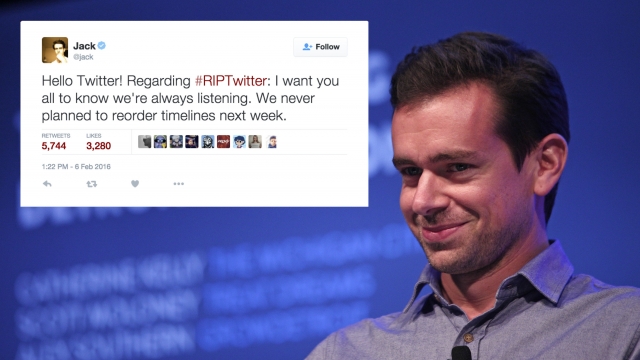 Twitter users are in full-on freak out mode over possible changes to the social network once again — but it turns out all the rage was premature.

Buzzfeed reported that Twitter might start using an algorithm to sort tweets by potential popularity instead of reverse chronological order. It also reported the change could go live as soon as next week.

Obviously a lot of users weren't too pleased about the possible change. #RIPTwitter was the top trend Saturday morning with many complaining the site was copying Facebook.

Now it turns out the outrage was misplaced. Twitter CEO Jack Dorsey posted some tweets to set the matter straight: "Hello Twitter! Regarding #RIPTwitter: I want you all to know we're always listening. We never planned to reorder timelines next week."

Twitter is under a lot of pressure to grow faster, and tweaking its main timeline could have been a way to make it more accessible for new users.