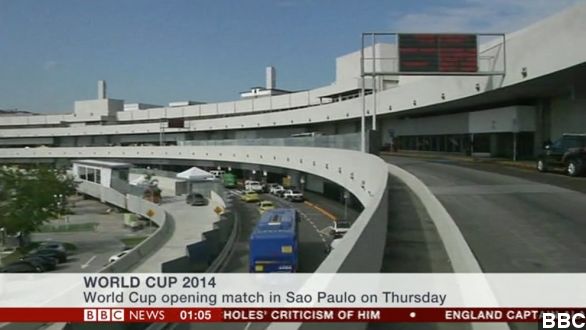 By Zach Toombs
June 11, 2014
One day before the first match of Brazil's World Cup, airport workers in Rio de Janeiro are walking off the job in protest.
SHOW TRANSCRIPT

If you thought the crippling transportation troubles surrounding Brazil's World Cup couldn't get worse, you were wrong. (Via Flickr / Nicolai)

"They are in dispute, they say, over a demand for a pay raise." (Via Sky News)

On Wednesday, workers at Rio de Janeiro's two airports said they would walk off the job in protest of low wages just one day before the World Cup's first game. Now, a labor court ruling has mandated that only 20 percent of workers may go on strike and only for 24 hours, or else the workers' unions will face hefty fees.

Even so, this will only worsen the transportation issues Brazil is already facing. A strike by subway workers in Sao Paulo last week brought the city to a standstill. (Via Al Jazeera)

In The Guardian's words, that subway strike "created a 200km matrix of solid gridlock, like a heaving, seething tumour suffocating the entire city." And that was before many fans and teams began showing up for the World Cup.

On top of all this, add severe infrastructure issues.

"With 24 hours to go, many stadiums resembled construction sites. Other projects weren't completed at all. Roads unpaved, an airport unfinished." (Via CBS)

On the bright side, Rio de Janeiro won't host a World Cup game until Sunday, leaving the city a few days to resolve the airport workers' strike. Still, those airports are meant to handle much of the transfer traffic to cities all over Brazil.